MARI: THE PALACE OF ZIMRI-LIM

The key example of an Old Babylonian city is not Hammurabi’s capital at Babylon, where later constructions of the first millennium BC survive best (see Chapter 10), but Mari, halfway up the Euphrates in modern Syria close to the Iraqi frontier. The evidence provided by the Palace of Zimri-Lim, the principal building of eighteenth-century BC Mari, is well complemented by the important find of over 25,000 clay tablets; together, architecture, art, and texts give us a full picture of the life of this city. Excavations conducted by French teams since 1933 have barely touched the town beyond the walls of the palace. Because the palace by itself seems like a town in miniature, this lack has not drawn much attention until recently.

Already important in the Early Dynastic period, Mari reached its height during the rule of Zimri-Lim, a regional potentate, ca. 1715—1700 BC. Zimri-Lim and the inhabitants of Mari were Semites. They wrote in the Akkadian language, but proper names and non-Akkadian words found in the Mari tablets place them in the north-west Semitic sphere together with such peoples as the Amorites. Mari grew rich thanks to its advantageous location on the trading routes from the west and the Mediterranean to both the Assyrian area to the north-east and Babylonia to the south-east. Taxes were imposed on all goods that passed through. The palace that Zimri-Lim inherited and remodeled so grandly was destroyed by Hammurabi of Babylon in ca. 1700 BC, but the substantial remains initially excavated in only five years under the direction of Andre Parrot allow a good look both at the architecture and at the workings of society and economy in the eighteenth century BC.

This palace illustrates an important shift in the government of ancient Mesopotamian cities. For the early Sumerians, everything belonged ultimately to the gods; human beings merely held the cities and the land and its fruits in trust for them. During the Protoliterate and Early Dynastic periods, the major constructions in a city honored these divine beings. Eventually, however, the ruler assumed a more deeply entrenched authority. This process began in the ED period, but developed significantly under the Akkadian Empire and the states that followed. The affirmation of kingship associated especially with the Akkadians seems to result not from any deliberate invention, but from the expansion of the political unit from the city-state to empire. Gods ruled in city-states, but empires were the creation of men. Such exalted treatment of kingship appealed to subsequent monarchs, needless to say, even when the territories they ruled hardly qualified as empires.


Changes in the role of the ruler were paralleled by new emphases in urban architecture. In the Ur III period, for example, palaces of the rulers crept closer to the temples, even in the heart of a classically Sumerian city such as Ur. By the time of Old Babylonian Mari, the prerogatives of the ruler were great. Kingship had become the umbrella that sheltered both the secular and the religious aspects of administration. Although royal palaces had been built as early as the ED period, including a substantial example at Mari itself, complexes that predate the eighteenth century BC are incompletely known. It is thanks to the accidents of archaeological discovery and exploration that the Palace of Zimri-Lim, thoroughly excavated and well published, has won its reputation as the prime example of the early Mesopotamian palace.

“Show me the palace of Zimri-Lim! I wish to see it.” Thus wrote an eighteenth-century BC king of Ugarit on the Mediterranean coast to the king of Yamhad (modern Aleppo) in central Syria. The palace was indeed a wonderful architectural complex that combined spaces for religious ritual, public ceremony, the private life of the ruler, and a wide range of commercial activities. Today, its mud brick walls, preserved in the south-west to over 4m in height, are sadly disintegrating from unchecked exposure to rain, wind, and sun, but even so, the visitor can understand its ancient renown. A complex of over 260 rooms in the surviving ground floor, the palace measured 200m X 120m, covering an area of ca. 3ha (Figure 3.10). The exterior walls, mud bricks piled in places to an impressive 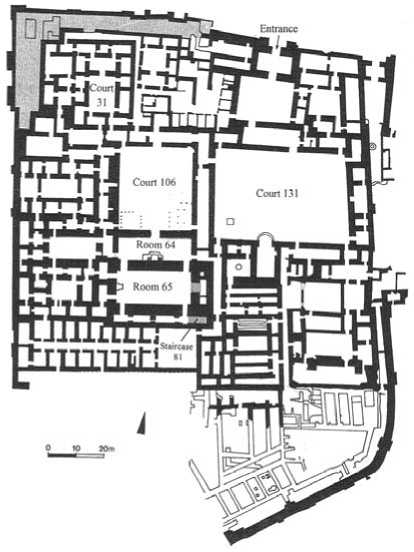 
Thickness of 4m, were protected with a coat of clay plaster. The main entrance gate lay on the north, off a paved street. From this gate, an important visitor proceeded to two large courtyards at the heart of the palace (131 and 106 on the plan) and to two key rooms off court 106, an antechamber (64) and an audience hall, generally identified as the throne room (65).

Paintings decorated the south wall of court 106 on either side of the doorway leading into room 64. The investiture of the king was illustrated to the west of the door, and a sacrificial procession, now badly fragmented, to the east. An overhanging roof may have protected these important figural scenes. On the other three walls of the court, a red and blue geometric band ran 2m above the ground. Additional finds of fragments at the base of these walls indicate more images were originally present.

The Investiture of the king, the best known of the wall paintings from Mari, imparts a visual message appropriately placed here at the entrance to the throne room: the king has the blessing of the gods, and the result is agricultural plenty (Figure 3.11). The painting measures 1.75m X 2.50m. The key scene takes place in the center in a small rectangular panel, a spatial form that hearkens back to Sumerian art. In the presence of three other divinities, the goddess Ishtar, with one foot on the back of a lion, hands the insignia of power to the king. The insignia, a circle and a stick, resemble the items held out to Hammurabi by Shamash on the Stele of Hammurabi and depicted as well on the Stele of Ur-Nammu. The theme is thus familiar to us, but the elaboration offered here is new. In the secondary panel just below, two goddesses, identifiable as such by the horns on their headdresses, are holding vases from which emerge a plant (a sign of vegetal fertility) and streams of water adorned with fish, the representation of the Euphrates River, the source of life in this arid region. These two panels are framed by a fantastic landscape created by two tall papyrus-like trees and two date palms with people climbing up to clusters of fruit. Three tiers of bulls, griffins, and winged human-headed lions, the last two composite creatures much loved in 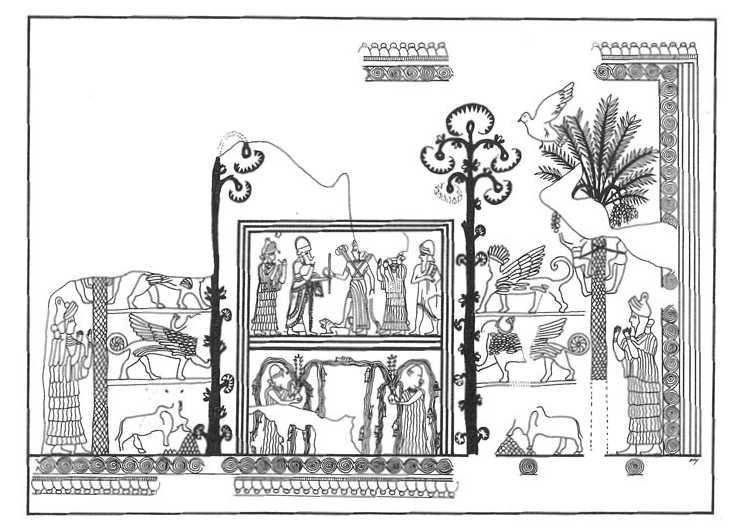 
Mesopotamian mythology, also inhabit the garden, as do female divinities standing beyond the lions.

The goddesses who hold the vases take on three-dimensional form in a statue discovered in fragments both in Court 106 and in Room 64. Reassembled for display in the Aleppo Museum, the almost life-size (1.43m) goddess stands stiffly, her feet held together and revealed beneath the hem of her dress (Figure 3.12). Her eyes no longer contain the inlay, and her nose is broken off, but her pleasant smile and full face give this goddess of fertility an appeal still effective today. In addition, the craftsmen of Mari rigged this statue as a fountain. Water from a tank would have flowed through the channel carved inside her body and out the vase, just as the wall painting illustrates. The inhabitants of Mari took their water imagery seriously.

From Court 106 one entered the two long narrow rooms, 64 and 65. In Room 64, just opposite the doorway from the court, stood a brick podium with a limestone surface decorated to imitate marble. Since steps led up to it, it would seem a likely spot for a dais surmounted by a canopy, as Parrot proposed. The inner room, 65, was the throne room of the palace. A low base at the west end marks the location of the throne. At the opposite, east end of the room, a broad flight of steps led to another platform, generally restored as a shrine. The lavish use of the sealant bitumen on the steps and on the statue bases 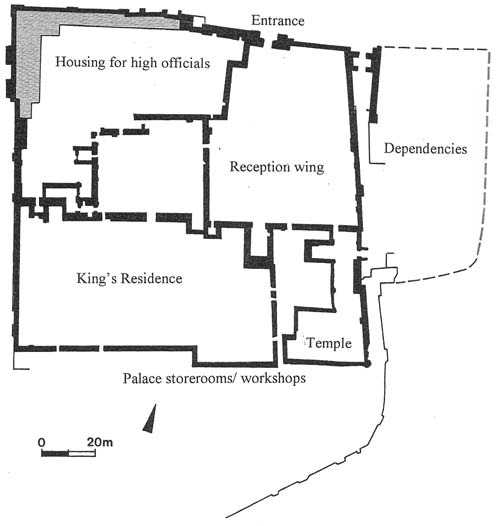 The rooms around this core of courts and audience halls can be divided into four main sectors (Figure 3.13). The functions of these rooms are in dispute, however. The arguments illustrate the difficulties of interpreting archaeological remains. A room may contain material collapsed from an upper floor or merely random trash, or looters may have stripped it of its identifying contents. How can the archaeologist know which is the correct explanation of what he or she finds? At Mari, for example, Parrot located the king’s private quarters in the north-west rooms grouped around Court 31. This area, which recalls the traditional Mesopotamian house with rooms arranged around a court, is furnished with such amenities as toilets and terracotta bathtubs. But Jean-Claude Margueron, Parrot’s successor, assigned this sector to dignitaries, and preferred to see the king at home in an upper story above the long, narrow storerooms south of Court 131 (the eastern end of the quadrant marked “King’s Residence” on Figure 3.13). Those upper rooms collapsed and disappeared in antiquity, but the remains of Staircase 81 prove they did exist. Limiting his remarks to the surviving ground floor rooms, Parrot had conjectured little about possible upper stories.