It was not his financial policy that led to Van Buren’s defeat in 1840. The depression naturally hurt the Democrats, and the Whigs were far better organized than in 1836. The Whigs also adopted a different strategy. The Jacksonians had come to power on the coattails of a popular general whose views on public questions they concealed or ignored. They had maintained themselves by shouting the praises of the common man. Now the Whigs seized on these techniques and carried them to their logical—or illogical—conclusion. Not even bothering to draft a program, and passing over Clay and Webster, whose views were known and therefore controversial, they nominated General William Henry Harrison for president. The “Hero of Tippecanoe” was counted on to conquer the party created in the image of the Hero of New Orleans. To “balance” the ticket, the Whigs chose a former Democrat, John Tyler of Virginia, an ardent supporter of states’ rights, as their vice presidential candidate.

Harrison came from a distinguished family, being the son of Benjamin Harrison, a signer of the Declaration of Independence and a former governor of Virginia. He was well-educated and in at least comfortable financial circumstances, and he certainly did not live in a log cabin. The Whigs ignored these facts. The log cabin and the cider barrel became their symbols, which every political meeting saw reproduced in a dozen forms. The leading Whig campaign newspaper, edited by a vigorous New Englander named Horace Greeley, was called the Log Cabin. Cartoons, doggerel, slogans, and souvenirs were everywhere substituted for argument.

The Democrats used the same methods as the Whigs and were equally well organized, but they had little heart for the fight. The best they could come up with was the fact that their vice presidential candidate, Richard Mentor Johnson, had killed Tecumseh, not merely defeated him. Van Buren tried to focus public attention on issues, but his voice could not be heard above the huzzahs of the Whigs. When the Whigs chanted “Tippecanoe and Tyler too!” and “Van, Van, is a used-up man” and rolled out another barrel of hard cider, the best the Democrats could come up with was:

A huge turnout (four-fifths of the eligible voters) carried Harrison to victory by a margin of almost 150,000. The electoral vote was 234 to 60. 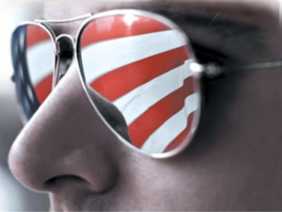