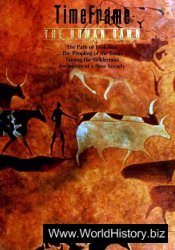 It begins with a rundown of evolution leading to man. The first chapter covers early ape men. The second deals with the early homos including Neanderthal; the second half of the chapter discussing the first anatomically correct modern man. (Cromagnon man isn't mentioned, possibly because the were so like modern man they might as well be called modern man.). The third chapter details how man began to settle down and domesticate plants and animals. The last chapter tells about the beginnings to civilization. At the end of the book, as in all books in this series, is a chronology showing what was happening at the same time in several different areas to the world.