Battleship at War: The Epic Story of the USS Washington 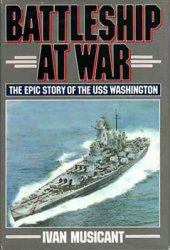 Washington was the second of a new class of extremely fast and powerful battleships built after the collapse of the naval limitation treaty. The ship was laid in 1937, commissioned just seven months before Pearl Harbor, and decommissioned after seven very active years. Washington saw service in the North Atlantic, then in all the major campaigns of the Pacific. Musicant, using primarily the ship's log and interviews with dozens of crewmen, has put together an absorbing chronicle of naval war. This is shipboard history; anything that didn't happen on or to the Washington gets short shrift. Musicant is also the author of a history of armored cruisers. Highly recommended for naval buffs and subject collections.