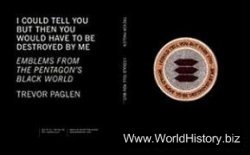 Author:Trevor Paglen
I Could Tell You But Then You Would Have To Be Destroyed By Me
Melville House Publishing
2007
Language: English
Format: PDF
Size: 76.5 MB


They are on the shoulders of all military personnel: patches showing what a soldiers unit does. But what if that is Top Secret?

In a work that combines ingenious journalism and bizarrely encoded art, author/photographer/investigator Trevor Paglen uncovers 75 never-before-seen-in-public military patches that reveal a bizarre secret world of the American military. Paglen investigates classified weapons projects and intelligence operations by examining their own imagery and jargon, disclosing new facts about important classified military units—here known by peculiar names (“Goat Suckers,” “None of Your Fucking Business,” “Tastes Like Chicken”) and illustrated with occult symbols and ridiculous cartoons. The precisely photographed patches—worn by military personnel working on classified missions, such as those at the legendary Area 51—reveal much about a strange and eerie world about which little was previously known.

The author has also assembled an extensive and readable guide, based on extensive interviews with military sources and government records, to the patches included here, making this volume perhaps the best available survey of the militarys black world—a $27 billion industry that has quietly grown by almost 50 percent since 9/11.