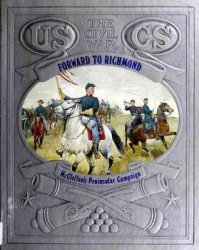 This volume serves nicely as an introductions to General McClellan and his role in re-building the shattered Union Army after the First Battle of Bull Run in the summer of 1861. It does a great job of describing the build-up to McClellan's Peninsular Campaign, which was his attempt to do a waterborne end run around the Confederate Army that was guarding Richmond, the Confederate capital. However, I feel that it is mistitled because it only covers the first half of the Peninsular Campaign. The text stops when Lee takes over for the injured Joe Johnston so we read nothing about the conclusion of the Peninsular campaign, including a majority of the battles. The book is beautifully illustrated and well-written. A novice to the Civil War will learn a lot, but even this old dog learned a couple of new things with this one.