The Reach for Empire 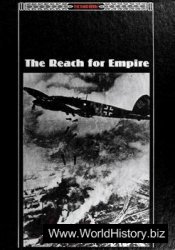 Four days after becoming chancellor of Germany, Adolf Hitler met with his senior generals at 14 Bendlerstrasse, the Berlin residence of Colonel General Kurt von Hammerstein-Equord, the commander in chief of the German army. The occasion, on February 3, 1933, was a dinner party to celebrate the sixtieth birthday of the foreign minister, Constantin von Neurath. Hitler's presence, however, provided Neurath and the military establishment with an unexpected opportunity to hear their new chancellor unbend in private. After a meal Hitler took command. He rose, tapped a glass for silence, and addressed the leaders he hoped would one day execute his ambitious plans for the expansion of the Reich. Hitler spoke for two hours, ranging across a number of topics. According to General Hammerstein's adjutant, who sat discreetly behind a curtain taking notes, Hitler labelled democracy the worst of all possible evils." he promised to eradicate Marxism "root and branch," to restore German military might, and to "weld together" the nation - a task that "cannot be done by persuasion alone, but only by force." At the heart of Hitler's rambling remarks was the concept of lebensraum, or living space.