Gallipoli: The Dardanelles Disaster in Soldiers' Words and Photographs 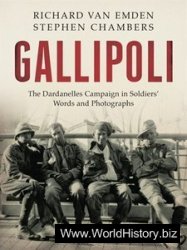 Presenting more than 150 never-before-published photographs of the campaign, many taken by the soldiers themselves, together with unpublished written material from British, Anzac, French, and Turkish sources, including eyewitness accounts of the landings, this is an unrivaled account of what really happened at Gallipoli Van Emden's gripping narrative and lucid analysis of Churchill's infamous operation complements Stephen Chambers's evocative images, showing how the rapid spread of diseases like dysentery, the lack of clean water and food, and the tremendous losses on both sides affected morale, until finally in January 1916, in what were the best-laid plans of the entire disastrous campaign, the Allies successfully fooled the Turkish forces and evacuated their troops from the peninsula with no additional casualties. Here, leading First World War historian Richard van Emden and Gallipoli expert Stephen Chambers have produced an entirely fresh, personal, and illuminating study of one of the Great War's most catastrophic events.