The Facts on File D-Day Atlas: The Definitive Account of the Allied Invasion of Normandy 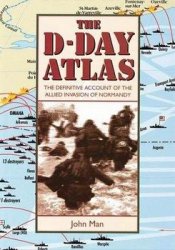 The Allied landing in German-occupied Normandy on 6 June 1944 was the greatest amphibious operation in military history. On the beaches and in the towns, fields and hedgerows of the French countryside, the outnumbered and outgunned German forces fought one of the most tenacious, skillful and courageous defensive campaigns of the entire war, and the fighting throughout June, July and August rivaled in intensity the worst days on the Somme or at Verdun thirty years before. The D-Day Atlas traces the Normandy campaign from its conception through to the destruction of the German 7th and 5th Panzer Armies at Falaise and the Allied liberation of Paris. It brings a new clarity not only to the disposition and movement of military units but also to the plans and objectives of the commanders on both sides, the nature of the Normandy terrain, the role of Allied air interdiction and long-range naval fire support, the movement of reserve units and supplies and the activities of the French Resistance.