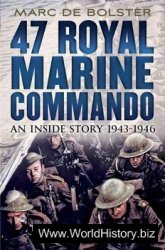 47 Royal Marine Commando: An Inside Story 1943-1946 tells the story of 47 Royal Marine Commando during the Second World War based on personal accounts written by veterans who served in this formidable unit. It is a story of young men who were to play a key role in freeing Europe from Nazi tyranny. From the D-Day landings in Normandy to fierce battles in Holland, some were taken prisoner by the enemy and sent to camps until freed at the end of the war in 1945.