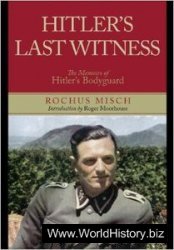 Author: Rochus Misch
Hitler's Last Witness: The Memoirs of Hitler's Bodyguard
Frontline Books
ISBN: 1848327498
2014
Format: PDF
Size: 12,7 МБ
Language: English
Pages: 256
After being seriously wounded in the 1939 Polish campaign, Rochus Misch was invited to join Hitler's SS-bodyguard. There he served until the war's end as Hitler's bodyguard, courier, orderly and finally as Chief of Communications. On the Berghof terrace he watched Eva Braun organize parties; observed Heinrich Himmler and Albert Speer; and monitored telephone conversations from Berlin to the East Prussian FHQ on 20 July 1944 after the attempt on Hitler's life. Towards the end Misch was drawn into the Fuhrerbunker with the last of the 'faithful'. As defeat approached, he remained in charge of the bunker switchboard as his duty required, even after Hitler committed suicide. Misch knew Hitler as the private man and his position was one of unconditional loyalty. His memoirs offer an intimate view of life in close attendance to Hitler and of the endless hours deep inside the bunker; and provide new insights into military events such as Hitler's initial feelings that the 6th Army should pull out of Stalingrad. Shortly before he died Misch wrote a new introduction for this first-ever English-language edition. The book also contains a foreword by the Jewish author Ralph Giordano and a new introduction by Roger Moorhouse.