Formation of Turkey, The: The Seljukid Sultanate of Rum, Eleventh to Fourteenth Century 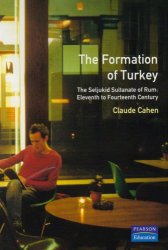 From Byzantium to the Mongols to the Sultans of Rum, this acclaimed book offers an important insight into the evocative history of Turkey before the coming of Ottoman power and illuminates a culture and a people who came to play a major role in the shaping of Europe and Asia.. Turkey forms a historical bridge between Europe and Asia and as such has played a pivotal role throughout history. The rise of Constantinople and the later Ottoman Empire are well known: less well understood are developments in the three centuries in-between. What led to the decline of the Byzantine Empire and what happened in the intervening years before the rise of the Ottomans? Translated from the original French, this classic work examines the history of the Turkey that eventually gave rise to an imperial power whose influence spanned East and West Those interested in Eastern European or Turkish history