Having been bom in England, Richard was officially invested as Duke of Normandy and then crowned King of England on 3 September 1189 at Westminster Abbey. Now finally free from the constraints of fighting his family and the rebels in his territories in England and France, Richard was free to undertake what had, since 1187 when he had taken the Christian cross as Count of Poitou (something he had done to renounce his past wickedness) and Saladin had taken Jerusalem, been his primary aim, retake the Holy Land from the Muslamic infidels. The problem was, while Richard's will and desire for combat was unabated by years of conflict, his inherited kingdom was not, with the royal coffers largely empty.

Richard therefore immediately set about raising the necessary funds to launch his own crusader army Firstly, he agreed with King Philip II of France to undertake the crusade jointly - with both leaders scared that if one left Europe then the other would invade his territories - and then proceeded to raise taxes in England, free King William I of Scotland from his oath of subservience in exchange for 10,000 marks, and sell much land and property, with the proceeds being funnelled into assembling an army of 4,000 knights, 4,000 foot-soldiers and a huge fleet of ships. At one point Richard reportedly said that 'I would have sold London if I could find a buyer', so determined was he to proceed on the Third Crusade. This large army was to travel with Phillip's to Palestine and retake Jerusalem at any cost. Boarding his flagship, Richard I left England in the summer of 1190.

As can be seen in greater detail in the column on the right, his passage to the Holy Land was eventful, with him first stopping in Sicily - where he famously freed his sister from the usurper King Tancred I - but then also conquered the entirety of the island nation of Cyprus, overthrowing the despot ruler Isaac Komnenos and installing Richard de Camville and Robert of Thornham as its governors (interestingly he later sold the island to the Knights Templar, where it was then sold to Guy of Lusignan, one of Richard's fellow crusaders). Indeed, while as we shall see, Richard made many conquests in the Holy Land, his capturing of Cyprus not only greatly added to his reputation but was also strategically incredibly important, allowing the waters on the approach to Palestine to be controlled by Christian forces. 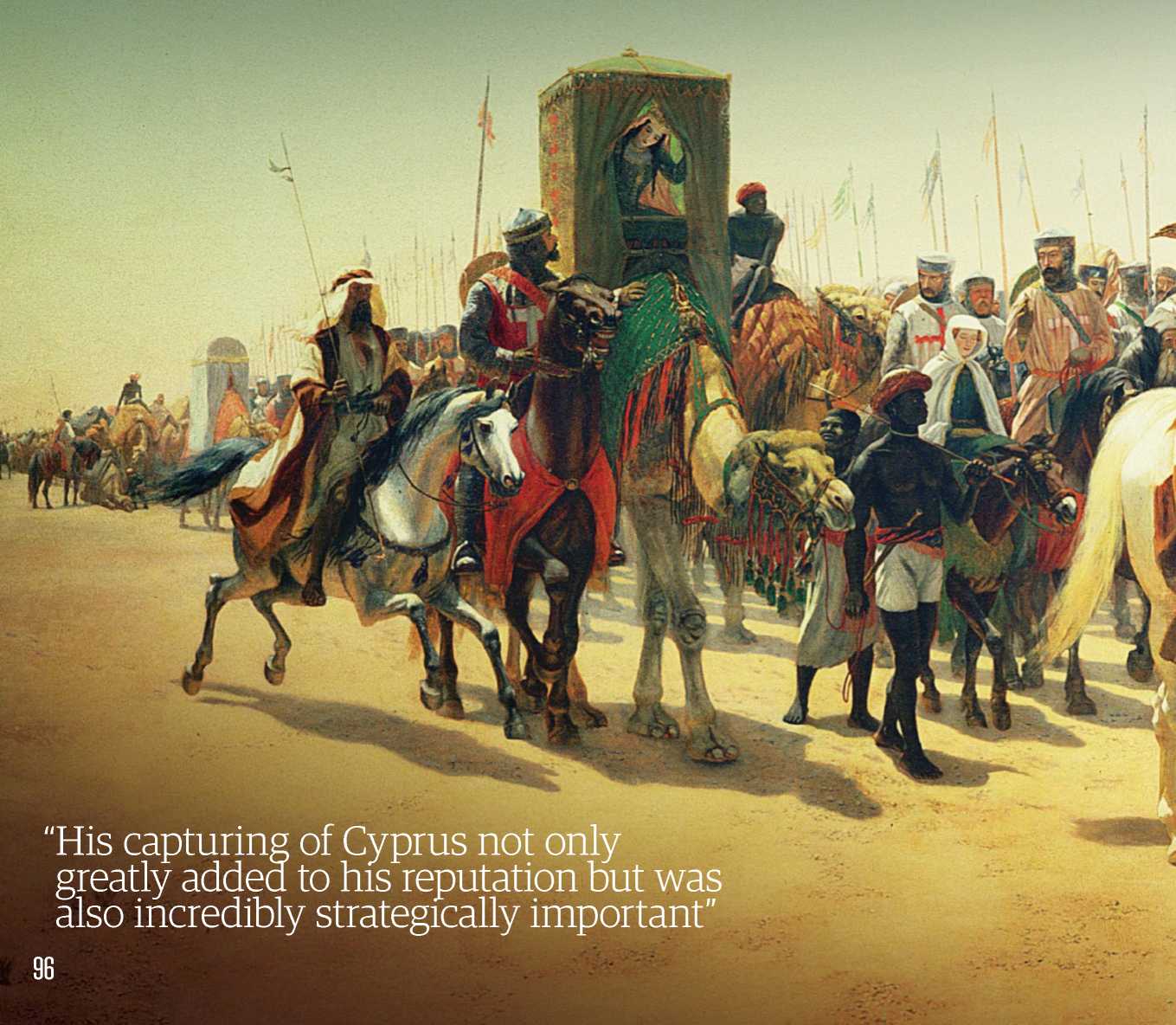 Despite multiple conquests and himself even getting married on his journey into the East, Richard eventually arrived in the Holy Land at the city of Acre on 8 June 1191. He immediately joined forces with Guy of Lusignan and Conrad of Montferrat and took the city in the now-famous 1191 Siege of Acre. As his and his allies' flags were raised above the city, Richard's Crusade had well and truly begun, with what was to be the first of several victorious conquests now firmly under his belt. Buoyed by his victory, Richard soon left Acre and marched south with his Crusader army, fearing that if Jerusalem was to be taken then this military momentum needed to be maintained.

Momentum was indeed maintained thanks to Richard's leadership, with victory both in 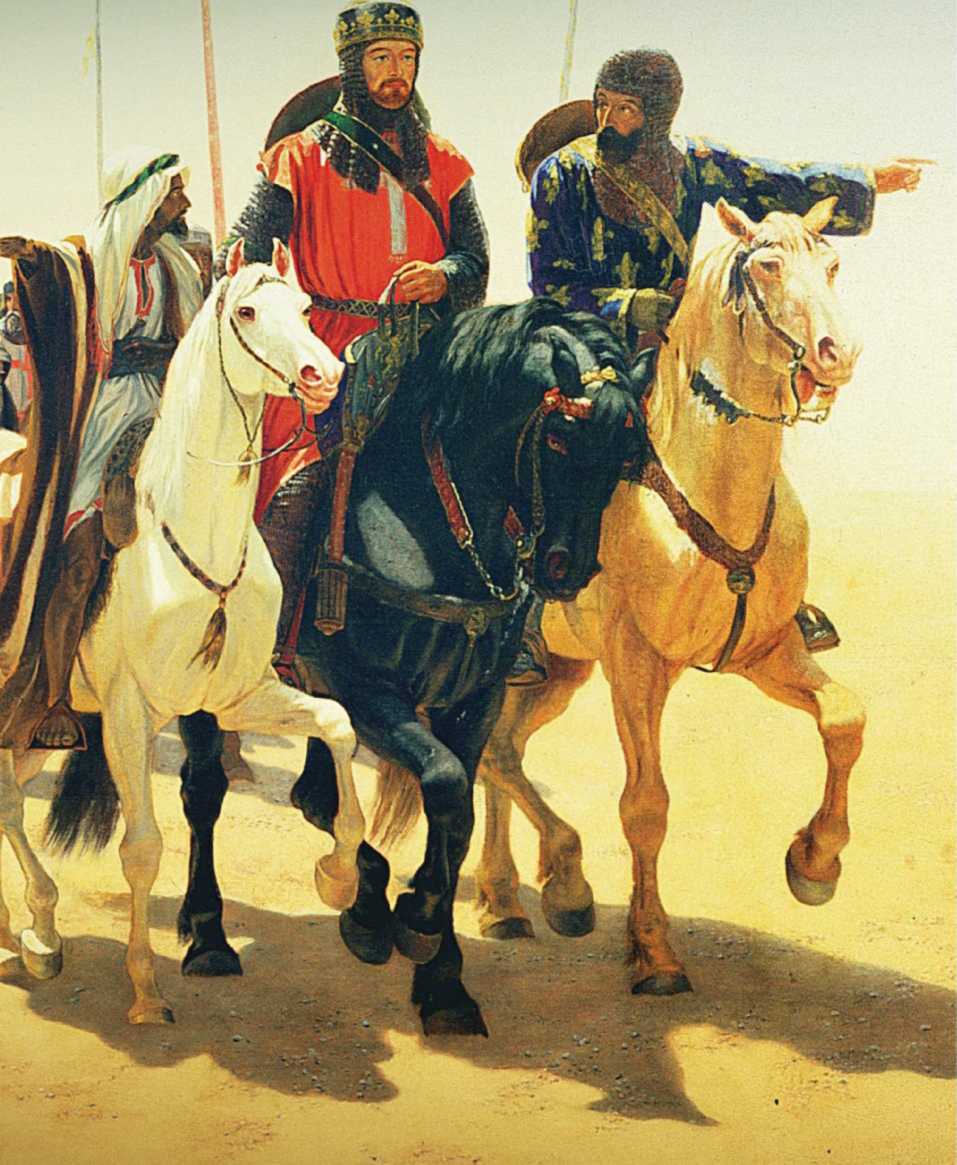 The Battle of Arsuf and at Beit Nuba, leaving the Crusader army a mere 12 miles from their ultimate destination of Jerusalem. By this point, Richard's multiple victories had left morale in Saladin's forces low and it has since been postulated that if the army had directly besieged the city it would have fallen to them quickly However, news of a possible Muslim relief army and poor weather led to Richard ordering the army to retreat back toward the coast, with him fearing that if they tried to take the city right now they might become trapped and wiped out. Returning to the captured city of Ascalon, Richard fortified his position.

It was here where he would make the first of multiple negotiations with Saladin, however at this stage they were unsuccessful, with the invasion still fresh.