Other Siberian cultures include the Yakut (“horse people”), the Evenk, who are known by several names, such as Orochen (“an inhabitant of the River Oro”), and farther to the east, the Chukchi and the Koryak. For the Yakut, winter homes hold about four to seven people and are rectangular in plan, measure from 5 to 10 meters on a side with a pounded earth floor excavated to a depth of about half a meter. At each corner there are thick vertical timbers, set into the earth and connected at their tops by horizontal crossbeams. Medial posts add more strength. The walls consist of poles or boards set into the ground and resting at the top against the crossbeams. The walls slant inward. A single, thick ridge-beam—doubled if sufficiently strong timber could not be found—runs from one side of the hut to the other. Upon this beam there rest poles or boards, and birch bark. The roof and walls are covered with a layer of earth mixed with clay and cow dung. When completed the structure takes on the shape of a truncated four-sided pyramid and in winter resembled a bump in the snow. A cowshed of similar design typically abuts the north side of the house, often separated from the living quarters by a board of skin partition. A door made of a single wooden plank covered with cowhide opens to the east, obeying a Yakut geomacy. There are small windows in the southern and western walls, covered with a Ash bladder in the summer and a sheet of ice in the winter.21

In summer, the Evenk and their Chukchi neighbors build chums, but with a diflerent design than usual. A circular fence is constructed with stantions set Armly in the ground. Against this rise a dozen or more slender poles that are bundled near the top. One or two horizontal rings serve to keep the bundle tight. The whole is covered with bark and in winter with deer furs. The dwellings are usually about 6 meters in diameter and 5 meters in height. There is a Are at the center.22 This unusual structure, which requires a great deal of care in the binding, has some formal similarities with the Mongolian ger, or yurt which was a later development. But how these connections developed over the stretches of time and space is unknowable (Figures 4.17, 4.18, 4.19, and 4.20).

The Koryak of northeastern Siberia are also reindeer hunters and breeders.23 They are probably a mixture of several populations that moved into the area already in the early Holocene. Traditionally, they lived on the coast of the Sea of Okhotsk mostly as hunters of sea mammals and are thought to be related to the Haida along the Canadian northwest coast. Koryak mythology centers around the supernatural shaman Quikil (Big-Raven), who was the Arst man 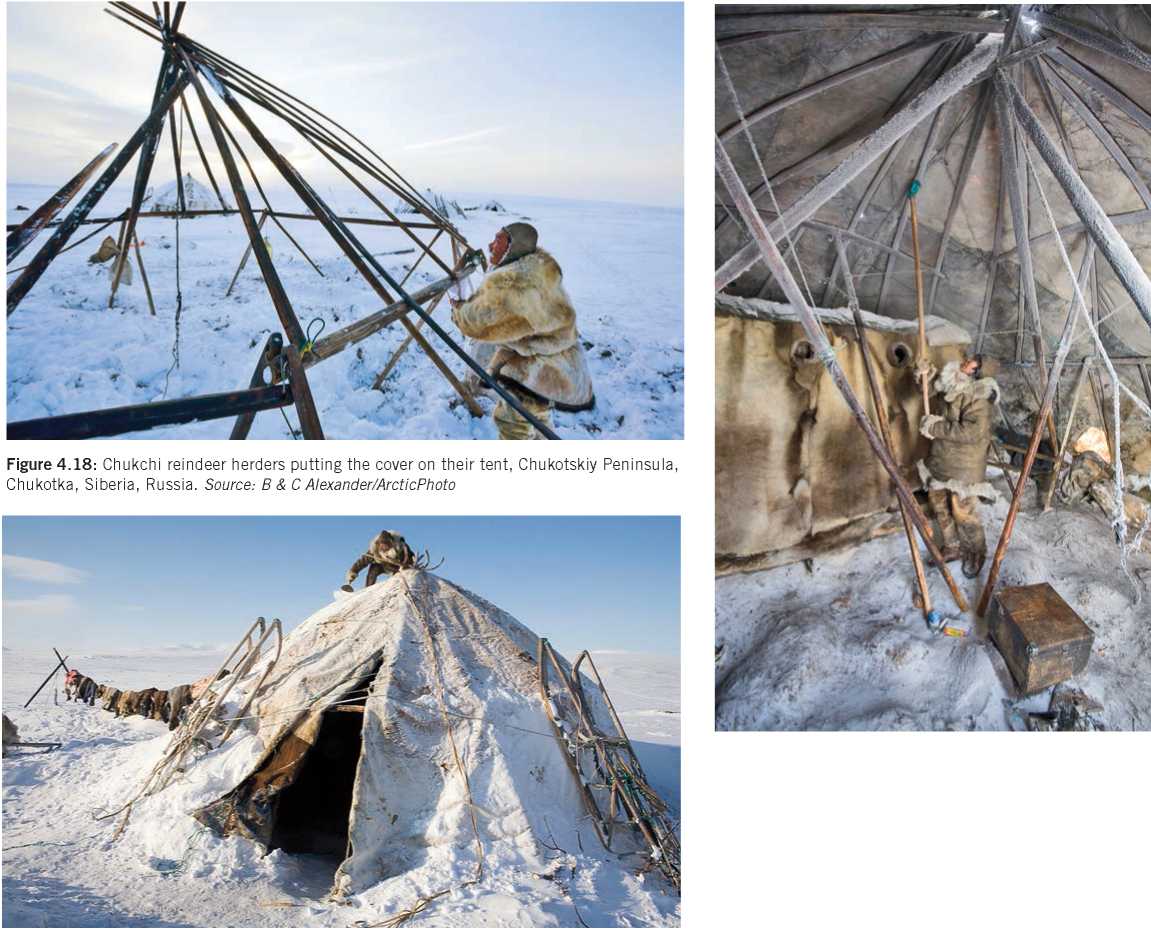 Figure 4.20: Natasha Nomro, a Chukchi woman, removing frost from the inside of her Yaranga, Chukotskiy Peninsula, Chukotka, Siberia, Russia. Source: B & C Alexander/ArcticPhoto 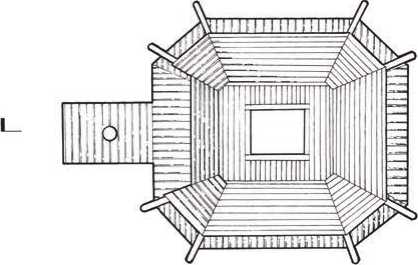 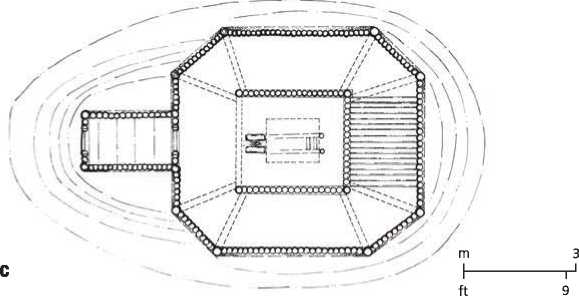 
And protector of the Koryak. Raven myths are also found among the Northwest Coast Amerindians.24 Before the relatively recent disappearance of their native culture, the Koryak lived in portable conical tents (yaranga), which are their version of the chum. Large yaragas could be 10 meters in diameter and could accommodate 25 people. Other Koryak groups lead more sedentary lives and build elaborate structures called lig-e-yan (“genuine house”) of poplar or aspen, which grow to considerable height along the rivers (Figures 4.21a, 4.21b, 4.21c, and 4.22). The dwellings vary in size according to the number of inhabitants. A small house would accommodate perhaps five to eight people, a large one (15 x 12 m) might house up to twenty-five. First a circular hole is dug about 20 centimeters deep. In this posts are erected in the form of an elongated octagon emphasizing the axial arrangement of entrance, fire pit, ladder, and sleeping platform. The tops of the poles are notched to receive the beams. In the center, four poles are driven in the ground and connected by cross beams that support the roof. The roof is in the shape of an upside-down funnel or umbrella and serves the purpose of protecting the house from the weight of the snow that can pile up during the winter storms. The wind striking the lower part of the funnel keeps the snow from accumulating on the roof. The winter entrance is on the roof itself, with the inhabitants descending along a tree with notches and holes through the smoke hole. In summer there is a ground entrance—which also serves as cold storage space—with the ground sloping down to the level of the room. In summer the ladder is removed. When it is replaced in winter it is rubbed with fat and given a charm so that it may not admit any evil spirits into the house. The 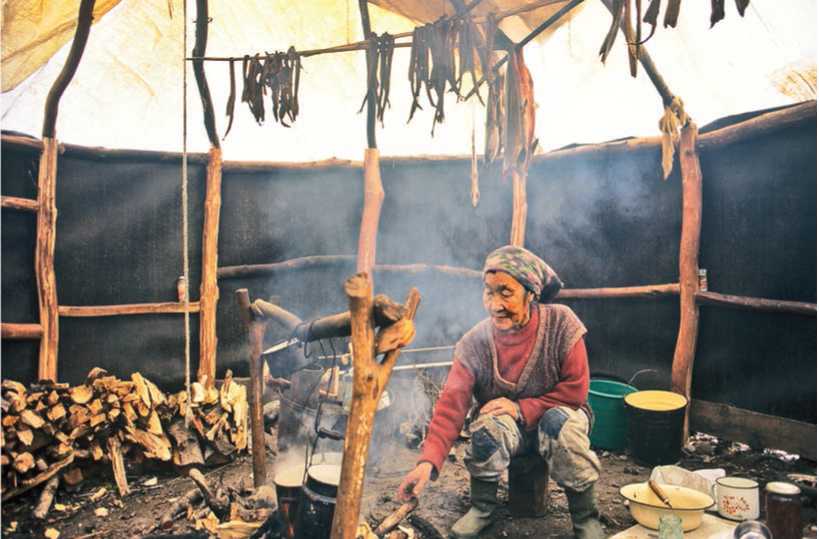 Ladder is seen as a type of family guardian. The hearth is not in the center but between the ladder and the entrance. The smoke rising strikes first the roof and though it preserves some of the heat, and in this way also traps some of the smoke. The side opposite the entrance serves as a seat and sleeping platform for visitors. Household articles line the walls. On the right side sleeps the master, on the left: his brothers and relatives, all on plank sleeping platforms. Partitions of reindeer skins can be dropped down for privacy. The corners of the house are used to store items such as nets, dogs’ harnesses, hunting implements, snowshoes, and tools.