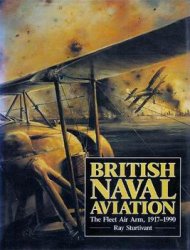 From conducting the first deck landing to deployment of the first vertical take-off aircraft, the British Fleet Air Arm has been at the forefront of international naval air development. Through the days of World War II, the postwar colonial problems and the Falklands conflict, the FAA has played an important operational role; in between times it has advanced the deployment and use of many specialist aircraft, helicopter and naval air weapons. Its "Fly Navy" motto is well known.