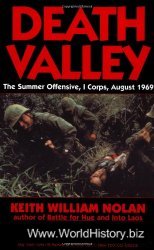 Author: Keith W. Nolan
Death Valley: The Summer Offensive, I Corps, August 1969
Dell
ISBN: 089141665X
1999
Format: EPUB
Size: 5,5 МБ
Language: English
Pages: 381
In the summer of 1969, in the mountains and valleys to the southwest of Da Nang, American troops fought a determined but costly series of actions against units of the regular North Vietnamese Army. The battles, the first since the announcement of the American withdrawal from Vietnam, were a watershed in American involvement in the country and took place in an atmosphere of increasing resentment - both at home, in the world's media and amongst many of the serving soldiers - against a war that was perceived to be going from bad to worse. This probing analysis of the fighting, and the background to the fighting, addresses the wider political and social issues but reserves particular emphasis for the bitter and prolonged fighting by the war-weary but determined men of the 7th Marine Regiment and the 196th Brigade, against the increasingly confident troops of the 2nd Division of the North Vietnamese Army.