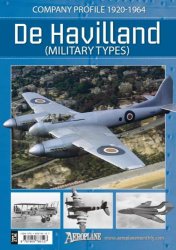 While de Havilland Company Limited did not come into being until 1920, this Company Profi le covers the period from Geoff rey de Havilland’s fi rst attempts to fl y in 1909, through to his departure from Airco in 1920. This crucial, early part of de Havilland’s career, saw him rise from an enthusiastic amateur designing his own aircraft in a shed, to a key fi gure and test pilot, working for the fl edgling Royal Aircraft Factory at Farnborough within a relatively short space of time. By the beginning of the First World War, de Havilland had become Chief Designer at Airco, where he created several successful military machines, including the D.H.2, D.H.4 and D.H.9A. The latter was destined to serve on into the 1930s and provide Geoff rey’s own company with some vital ‘bread and butter work’ which helped to drag it through the fi rst decade of its existence.