Attack on the Somme: Haig's Offensive 1916 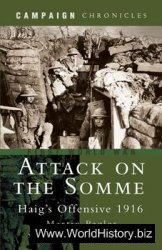 The Battle of the Somme is fixed in the country's collective memory as a disaster - probably the most bloody episode in the catalogue of futile offensives launched by the British on the Western Front. Over five months of desperate fighting in 1916 the British wrestled with the Germans for control of a narrow strip of innocuous French countryside. When the fighting petered out the British had barely pushed back the Germans from their original positions for a combined casualty figure of over a million men. But after 80 years this notorious episode in western military history deserves to be reassessed. Previously unpublished eyewitness accounts are used to give a fascinating first-hand view of the immediate experience of the fighting.