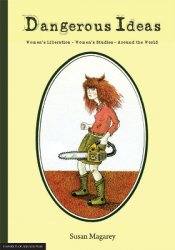 Dangerous Ideas explores sex and love, politics and performance, joy and anguish in a collection of essays focused on the history and politics of the Women’s Liberation Movement and one of its offshoots, Women’s Studies, in Australia and around the world.
These are serious matters: they are about tectonic changes in people’s lives and ideas in the late twentieth century, too little remembered or understood any longer. ‘Feminism’, this book suggests, ‘is always multiple and various, fluid and changing, defying efforts at definition, characterisation, periodisation’. Nevertheless, Dangerous Ideas tackles some hard questions. How did Women’s Liberation begin? What held this transformative movement together? Would it bring about the death of the family? Was it reorganising the labour market? Revolutionising human reproduction? How could Women’s Studies exist in patriarchal universities? Could feminism change the paradigms governing the world of learning? In the United States? In Russia? In the People’s Republic of China?
It is great fun, too. This book tells of Hobart’s hilarious Feminist Food Guide; of an outburst of creative energies among feminists – women on top, behaving badly; of dreams and desires for an entirely different future. And, always unorthodox: it finds hope and cheer in a history of the tampon.