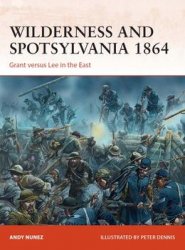 In May 1864 the Union Army of the Potomac under General George Meade had been in a leisurely pursuit of the Confederate Army of Northern Virginia for nearly a year after the defeat of the Rebels at Gettysburg. Confederate commander General Robert E. Lee still retained his awe-inspiring reputation for wrecking Union armies that got too close to Richmond and Meade was still cautious.