Wellington and Waterloo: The Duke, The Battle and Posterity, 1815-2015 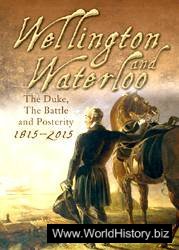 The Battle of Waterloo is a defining moment in European history that has been immortalised in literature and art for generations. This is the first book to trace how perceptions and commemorations of it have changed over two centuries.
However, what of the man behind the victory? Depictions of Wellington, the victor of Waterloo, have varied over the years.
Though in the battle's immediate aftermath the most feted man in Europe, the Iron Duke's life was lived in the shadows: that of his brother in India, of Napoleon on the battlefield, and of Lord Liverpool and Sir Robert Peel in the post-1815 Tory Party. And in later life, in opposing reform, the hero became reviled. Neither conventional military history nor a biography, this book traces the restoration of the Duke's reputation and argues that the man is as important to history today as the battle he is remembered for.