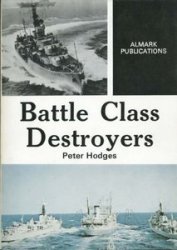 Author: Peter Hodges
Battle Class Destroyers
Almark Publishing
1971
ISBN: 085524013X
Format: PDF
Size:7,2 МБ
Language: English
Pages: 64
THIS book deals with a class of British warship which many regard as among the most handsome ever to serve in the Royal Navy. The speed, versatility and offensive power of the torpedo-armed destroyer has always captured the imagination; and the 'Battle' class ships combined all these with a powerful gun armament.
Herein will be found photographs of every Royal Navy 'Battle' class ship. Scale profile drawings of the four major variants are included as well as sketches of some of the weapons; and for general interest, the ship's badges and some colour schemes are shown in full colour.
For the supply of pictures thanks are due to the following organisations or individuals:
The Ministry of Defence; The High Commissioner for Australia; The High Commissioner for Pakistan; Anthony Pavia, of Birkirkara, Malta; P. A. Vicary, of Cromer, Norfolk; Messrs Wright and Logan, of Southsea. Portsmouth, Hants; Ian Gleed-Owen of the Naval Photographic Club; The Editor of Navy News; The Editor of The News, Portsmouth; Messrs John I. Thornycroft & Co. Ltd.; and the very many private individuals who kindly donated photographs. It was not possible to include them all, but each was most valuable as an aid to research.
At the time of writing, the 'Battle' class has almost disappeared from active service, and it is hoped that these pages will keep alive the memory of a splendid group of warships.