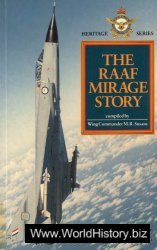 The RAAF Mirage Story is a compilation of personal accounts by those who built, maintained and operated the RAAF Mirage. It is not an official history but is a story as recalled by those who took part.
The Marcel Dassault Mirage III came into service with the French Air Force in the late 1950's. Thirty years later variants still fly in France and places like Israel, South Africa and The Argentine; other countries seek refurbished aircraft. The Mirage has been distinguished in war service, claiming somewhere between 600 and 1 000 kills, perhaps more. After 25 years service with the RAAF, the Mirage III0 is to be withdrawn from operational service. The stories and impressions chronicled in this book testify to the importance of the Mirage to the RAAF and to Australia, to its quite specific limitations and most importantly to the affection that grew with experience with this great and beautiful aircraft.