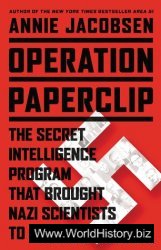 The explosive story of America's secret post-WWII science programs, from the author of the New York Times bestseller Area 51
In the chaos following World War II, the U.S. government faced many difficult decisions, including what to do with the Third Reich's scientific minds. These were the brains behind the Nazis' once-indomitable war machine. So began Operation Paperclip, a decades-long, covert project to bring Hitler's scientists and their families to the United States.
Many of these men were accused of war crimes, and others had stood trial at Nuremberg; one was convicted of mass murder and slavery. They were also directly responsible for major advances in rocketry, medical treatments, and the U.S. space program. Was Operation Paperclip a moral outrage, or did it help America win the Cold War?