Empire of the Seas: How the Navy Forged the Modern World 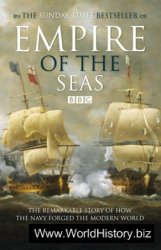 Re-issued in trade paperback format Brian Lavery's narrative explores the navy's rise over four centuries; a key factor in propelling Britain to its status as the most powerful nation on earth, and assesses the turning point of Jutland and the First World War. He creates a compelling read that is every bit as engaging as the TV series itself.