Handbook to life in Renaissance Europe 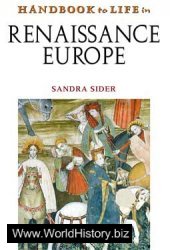 
The period covered by the Renaissance varies, depending on the geographic region or subject under discussion. The Renaissance began in northern Italy in the latter 14th century, culminating in England in the early 17th century. Consequently the present book spans two centuries, c. 1400–c. 1600, emphasizing the pervasive influence of Italian sources on the development of the Renaissance in other parts of southern Europe as well as in the north. Although the ideal of the Renaissance individual was exaggerated to the extreme by 19th-century critics and historians, there was certainly a greater awareness of an individual’s potential by the 16th century. Emphasis on the dignity of man (though not of woman) distinguished the Renaissance from the relatively humbler attitudes of the Middle Ages. In the love poetry of Petrarch and the great human scheme of Dante’s Commedia, individual thought and action were prevalent.