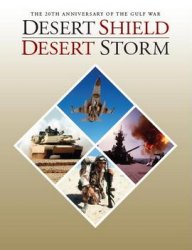 Throughout this January and February America and its allies everywhere have been recognizing and commemorating the 20th anniversary of Operations Desert Shield and Desert Storm.