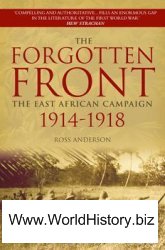 The war in East Africa spanned the entire period of the conflict. It was the largest yet to take place on African soil. Four empires and their subject peoples were engaged, from modern Kenya in the north to Mozambique in the south. In deserts and jungles and over mountains, the troops suffered, almost always short of raions and equipment. This is the only history of the neglected campaign. Ross Anderson details the strategic and political aims of the protagonists - it should be remembered that while it was part of the Great War, this was also a colonial war