The Tigers of Bastogne: Voices of the 10th Armored Division in the Battle of the Bulge 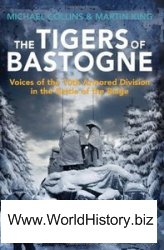 Author: Michael Collins
The Tigers of Bastogne: Voices of the 10th Armored Division in the Battle of the Bulge
Casemate
ISBN: 1612001815
2013
Format: PDF (conv)
Size: 6,9 МБ
Language: English
Pages: 296
The gallant stand of the 101st Airborne Division at Bastogne has long become part of historical and media legend. But how many students of the war realize there was already a U.S. unit holding the town when they arrived? And this unit—the 10th Armored Division—continued to play a major role in its defense throughout the German onslaught.
In The Tigers of Bastogne, authors King and Collins finally detail the travails of this young armored division, which had only arrived in Europe that fall, yet found itself subject to the full brunt of Manteuffel’s Fifth Panzer Army in the Ardennes. At first overwhelmed, and then falling back to protect the vital crossroads, the 10th Armored was reinforced (not “saved”) by the Screaming Eagles, and its men and tanks went on to contribute largely to America’s victory in its largest battle of the war.
The 10th Armored had only arrived in Europe that September, as part of Patton’s Third Army, and their divisional motto, “Terrify and Destroy,” was somewhat belied by the onslaught of Nazi panzers that burst across no-man’s-land on December 16. Instead their nickname, “The Tiger Division,” became fully earned, as they went on the defensive at Bastogne, surrounded by an entire German army, yet refused to concede a single inch of ground not earned with blood.