Operation Barbarossa: Strategy and Tactics on the Eastern Front, 1941 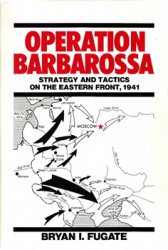 This insightful book covered the initial year of the German invasion of Soviet Russia. The book is well written and the author was able to go beyond the basic assessment as he tries with certain success, what went wrong and what went right during the initial seven months of this campaign. The author made it clear that it took a lot more then bad weather, Hitler's interferences and over extension of German forces to cost Germany any chance for victory during this period. He seem to be in the mind that German overall military leadership remains badly divided and also gives credits to the Russian willingness to trade space for time as they took the initial devastating losses and converted that time into a defensive position where they could launch a set of massive counter offensives. It seem that Germans were fixated into short term goals and objectives while the Russians were gearing for the long haul The author gives a fair and pretty perceptive views of the strategic and tactical situation during this initial seven month period of the Operation Barbarossa.