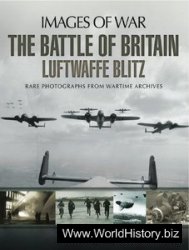 This new collection of archive imagery from Philip Kaplan offers a gripping, graphic view of the routine repeated each day and night, from the summer of 1940 through to the following spring, by the German bomber crews bringing their deadly cargoes to Britain. Through mainly German archival photos, it profiles airmen on their French bases and in the skies over England; the aircraft they flew, fought and sometimes died in; their leaders; their targets and results; the R.A.F pilots and aircraft that stood in opposition to the German forces, and the losses experienced on both sides. The images, from the Bundesarchiv and other German and British photographic sources, vividly convey a real sense of events as they played out, as do the compelling first-hand accounts from a host of participants on both sides, eyewitnesses to one of the most brutal sustained bombardments of the Second World War.