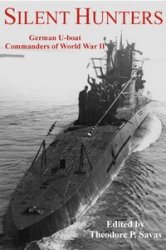 Silent Hunters German U-Boat Commanders of World War II
Savas Publishing
ISBN: 1844150623
2004
Format: EPUB
Size: 3,3 МБ
Language: English
Pages: 240
While most aspects of the bitter U-Boat struggle have been told and retold from both the Axis and Allied points of view, the careers of some highly effective U-boat commanders have languished in undeserved obscurity. The profiles of six such commanders are presented in this collection of essays. They include Karl-Friedrich Merten, ranked among the war's top tonnage aces; Ralph Kapitsky, whose U-615 suicidal surface-to-air battle in the Caribbean allowed many of his fellow submariners to escape into the Atlantic; Fritz Guggenberger, who sank an aircraft carrier and organized the biggest POW escape attempt in American history.