D-Day: Operation Overlord From It's Planning to the Liberation of Paris 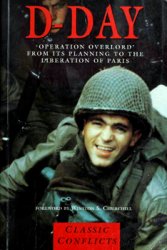 The D-Day landings in Normandy on June 6, 1944 have been described as the greatest amphibious operation in the history of warfare. The scale was majestic; 5,000 ships, together with thousands of lesser craft and backed by 11,000 aircraft. If the scale of the military undertaking was heroic, so too was its objective--nothing less than the defeat of Nazi Germany and the liberation of Europe. In this dramatic account of events, military experts from Britain, the United States and Germany describe the planning, build-up and execution of the D-Day attack.