The Struggle for Europe 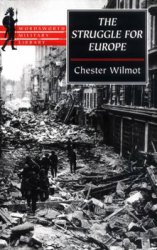 This classic text describes the build-up of the invasion of Europe, and the scenes at the beach-head and in the "bocage" of Normandy. It also discusses the disputes among the Allies, the Anglo-American difficulties over Grand strategy, and the friction between Hitler and his generals which culminated in the plot of July 20th 1944, as well as the pincer movements of the Russians and the Anglo-American forces which brought Europe to victory.