The Sword And The Shield: The Mitrokhin Archive And The Secret History Of The KGB 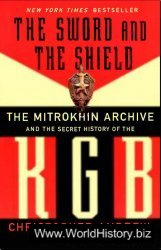 The Sword and the Shield is based on one of the most extraordinary intelligence coups of recent times: a secret archive of top-level KGB documents smuggled out of the Soviet Union which the FBI has described, after close examination, as the "most complete and extensive intelligence ever received from any source." Its presence in the West represents a catastrophic hemorrhage of the KGB’s secrets and reveals for the first time the full extent of its worldwide network.Vasili Mitrokhin, a secret dissident who worked in the KGB archive, smuggled out copies of its most highly classified files every day for twelve years. In 1992, a U.S. ally succeeded in exfiltrating the KGB officer and his entire archive out of Moscow.