This book is concerned with two themes. The first, a multiple and largely narrative one, is the history of Byzantium’s relations with the peoples of Eastern Europe. These relations - political, diplomatic, economic, ecclesiastical and cultural - will be considered both in the light of the Byzantine Empire’s foreign policy, and from the point of view of the East European peoples who, whether on their own initiative or in response to impulses emanating from Byzantium, were drawn into its orbit. The second theme is more unitary and synoptic. Through the relations established by these peoples with the empire during the Middle Ages, their ruling and educated classes were led to adopt many features of Byzantine civilisation, with the result that they were able to share in, and eventually to contribute to, a common cultural tradition. This tradition was compounded of diverse elements. Among them were a common profession of Eastern Christianity; the recognition of the primacy of the Constantinopolitan Church; the acknowledgement - at least tacit - that the Byzantine emperor was endowed with a measure of authority over the whole of Orthodox Christendom; the acceptance of the norms of Romano-Byzantine law; and the belief that the literary standards and artistic techniques cultivated in the empire’s schools, monasteries and workshops were of universal validity and worthy of imitation. The Byzantine heritage of these East European countries was, I believe, a significant enough component of their medieval tradition to justify the view that, in some respects, they formed a single international community.

In attempting to write the history of this community I have encountered a number of difficulties. In the first place, the geographical area inhabited by the European ‘heirs of Byzantium’ altered in the course of time, expanding in some regions, contracting in others. Its heartland was the Balkan peninsula, the home of the Greeks, the Slavs and the Albanians. In the ninth and tenth centuries it came to include Russia, and in the late Middle Ages the Rumanian lands as well. For several centuries, moreover, Byzantine civilisation had some impact on both sides of the middle Danube, and thus influenced the early medieval culture of the Moravians, the Czechs and the Hungarians. The notion of‘Eastern Europe’, used in this book to cover all these regions, is little more than a loose empirical category, obtained by combining a geographical with a cultural criterion. It thus excludes Poland, whose culture since the early Middle Ages has depended on the Latin world, as well as Sicily, Venice and the Caucasian lands which, though they lay for centuries within the Byzantine cultural orbit, will for geographical reasons be given no more than cursory consideration. The fact that the frontiers of Eastern Europe were shifting and impermanent imposes some limitation on a continuous study of its history.

A further difficulty lies in the fact that, to judge from the extant documents, the East Europeans of the Middle Ages were only fitfully and imperfectly aware of *the nature of this international community. Its size and complexity, the subtlety of the bonds that kept its component parts together, as well as the slowness of its growth, no doubt imposed too great a strain on men’s imagination. Most obvious and easiest to comprehend was its religious aspect. When they thought of this community as a whole, the East European peoples mainly conceived it as the body of Orthodox Christendom of which the Church of Constantinople was the acknowledged head and administrative centre. Its political, juridical and cultural features were less clearly perceived. Though their rulers recognised that the Byzantine emperor wielded much power over the church to which they belonged, that he was the ultimate source of law and that his authority transcended the political boundaries of the empire, they were so anxious to vindicate their own claims to national sovereignty that they probably found it unnecessary, even undesirable, to define their relationship to him with any precision. The Byzantines, for their part, believing that the political organisation of this world was part of the divine order, do not seem to have felt the need to reflect deeply on the actual mechanism of international society. Most of them took for granted the idea that their emperor’s authority was universal. Nor did they have a special word for the whole community of their satellite peoples. ‘Barbarians’ before their conversion to Christianity, they were supposed, on their baptism, to become subjects of the emperor of East Rome. With characteristic semantic ambiguity, the Byzantines applied the terms used to describe their own state - basileia (‘empire’), oikoumene (‘the inhabited universe’), politeuma (‘government, community’) - to the group of nations over which they claimed sovereignty. The word ‘commonwealth’, likewise ambiguous, is used in this book as a rough equivalent of at least the last of these Greek terms. No precise constitutional significance should be ascribed to it, nor is its purpose to suggest any modern parallel. It is offered as a convenient and, it is hoped, not inappropriate description of a society whose structure and bonds were seldom wholly visible to men of the Middle Ages, but which the historian today, with his greater awareness of the unifying effect of culture on human institutions, values and behaviour, can perceive more clearly.

For this was a real society, not a mere intellectual abstraction. In recent years several distinguished Byzantinists have focused attention upon it, by studying the motive forces behind the empire’s claim to universal hegemony. Their work - particularly the writings of George Ostrogorsky, Franz Dolger and Andre Grabar - has widened and deepened our understanding of international relations in medieval Eastern Europe. But they wrote primarily from the vantage-point of Byzantium: it was not their purpose to consider the cultural bonds of this community nor the contribution made to its life by the non-Byzantine peoples of this area. To the native scholars of Eastern Europe, specialists in the medieval history of their own countries, we owe a considerable debt. However, with comparatively few exceptions - that of the Rumanian historian Nicholas lorga is outstanding - they have tended to write from an ethnocentric, if not nationalistic, point of view. Much has certainly been gained by their willingness to concentrate on the national elements in their countries’ past. But there is danger for the medievalist in the temptation to equate national unity with unity of culture. And to view the association of the East European countries with Byzantium as a struggle between Byzantine ‘imperialism’ and local national aspirations, is to miss something of that rich cosmopolitan experience which these countries enjoyed during much of their medieval history.

The problem of nationalism will be discussed several times in this book. Traces of it will be found in several East European countries of the Middle Ages. But by comparison with Western Europe it was muted and slow to develop. Byzantium retained a towering prestige, and its religious, cultural and political leadership was not denied. For all the irritation provoked by the ‘superbia Graecorum’, there is no real analogy in medieval Eastern Europe to John of Salisbury’s defiance of twelfth century Hohenstaufen imperialism: ‘Who appointed the Germans to be judges over the nations?’ In the last resort, the fact that so long as the empire existed no single nation of Eastern Europe successfully challenged its religious and cultural supremacy, nor its claims to embody the Roman tradition of universality, is the clearest proof that the Byzantine Commonwealth was no mere figment of men’s imagination. Sprawling between shifting boundaries, divided into ethnic groups and warring national states, increasingly threatened with disruption by centrifugal forces, this commonwealth, born in the travails of the barbarian invasions, achieved enough vitality and coherence to survive as a discernible entity from the mid-ninth to the mid-fifteenth century. It was finally destroyed by the Ottoman conquest of Constantinople in 1453, though its influence lived on in parts of Eastern Europe until the late eighteenth century. How it came to endure for so long is a question to which this book may suggest an answer. 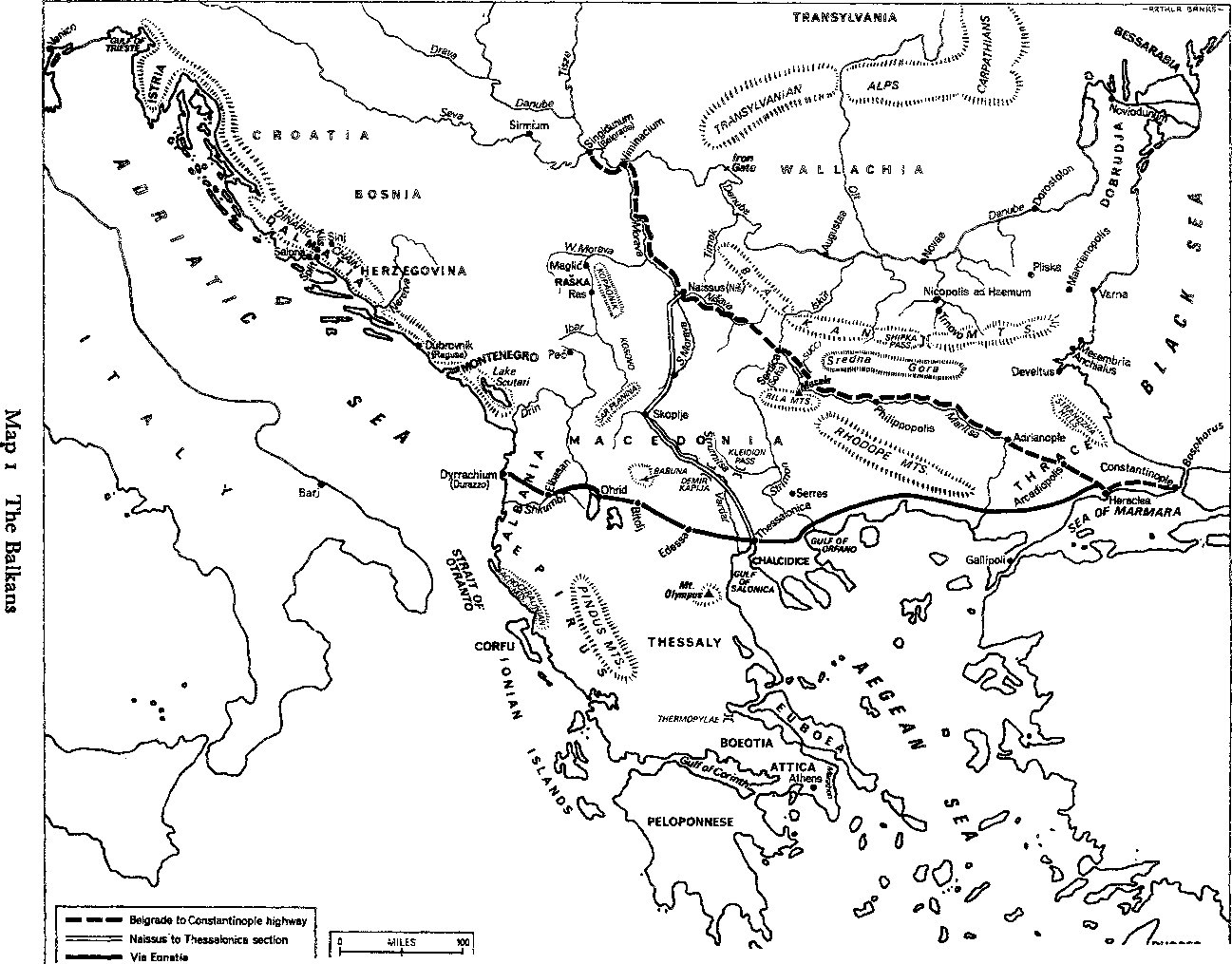