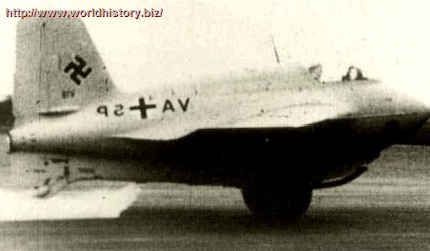 The German Messerschmitt Me 163 "Komet" was perhaps the most unique frontline, operational-level fighter design of World War 2. German engineers, seemingly always on the cutting edge of evolving war technology, developed the rocket-powered aircraft based on early testing completed with an engine-less glider. The resulting research produced the single-seat, swept-wing fighter that was equally dangerous to both enemy bomber crews and the Me 163 pilot alike. The Me 163 first flew on September 1st, 1941 and was formally introduced in the Luftwaffe inventory in 1944. Despite its impressive performance statistics, the Me 163 was something of a tactical failure and more or less a technological dead end with the rise of jet-powered flight soon to come. The idea of fast interceptors also soon gave way to ground-based homing/guided missile technologies.

The Me 163 was born from the mind of Dr. Alexander Lippisch who pioneered a great deal of data research of tailless glider designs dating back to the 1920s prior to joining the Messerschmitt concern in 1939. Work began on such a tailless design through the DFS 194 glider outfitted with a Walter rocket motor. The motor relied on a volatile, though potent combination, known as "C-Stoff" and "T-Stoff". The new Messerschmitt design would utilize the chemical explosion to power the small fighter at break-neck speeds - able to outfly any bomber formation escort fighters with ease. More importantly, the design could be aloft in seconds in response to incoming waves of Allied bombers appearing through both day and night campaigns, wreaking havoc on German industry and supply lines. By 1944, the German initiative that was once held early in the war was all but lost and it began to fight more a defensive war for its very survival.

Testing occurred at the covert Peenemunde facility in June of 1940 to help prove the concept sound. Despite the motor failing to impress due to reliability issues, the airframe itself handled well in the hands of test pilot Heini Dittmar. Serial production of several prototype forms was ordered under the "Me 163" designation in the early part of 1941. At least five "V" based prototypes emerged beginning with V1. Some eight preproduction forms then followed in the Me 163 "A-0" format. Early prototypes managed to reach an impressive 340 miles per hour in recorded test flights.

The diminutive Me 163 was piloted by a single crewman housed under a wide clear canopy. The design was given the then-revolutionary concept of swept-back wings mounted along each fuselage side. The fuselage was a stout, portly design intended to house the cockpit and necessary fuel stores. The empennage was capped by a simple vertical tail fin lacking any horizontal planes. Take-off for the Me 163 was achieved by way of a wheeled, unsprung "dolly" assembly with the rocket motor at full thrust. The dolly was then jettisoned immediately after take-off for it proved an unnecessary counter-aerodynamic element. The interceptor then climbed to the required attack altitude to meet the incoming enemy bomber formation, most likely expending all of its fuel supply by this time. From its lofty perch, the accepted tactic for the Me 163 became a high-speed swoop down into the bomber formation, engaging targets with cannon for as long as momentum allowed - usually two or three dives though each swipe at the target was managed through a quick three-second-or-less window of opportunity. Once spent of both fuel and ammunition, the Komet was then glided to the ground under basic physics, landing on a relatively smooth patch of earth atop the provided spring-loaded centerline skid.
www.militaryfactory.com 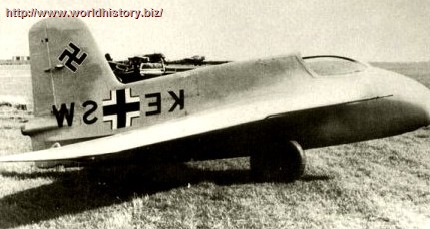 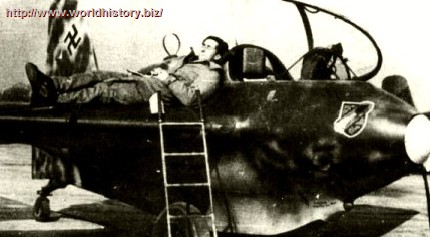 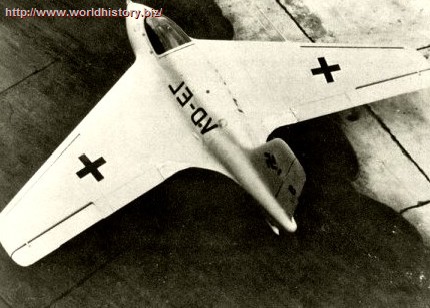 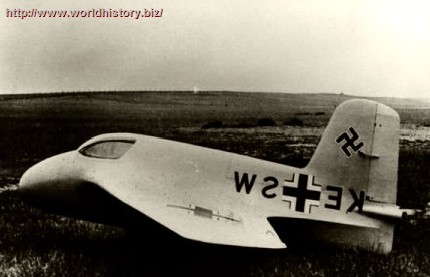