The Question of Culture

The more we learn of the behavior of our nearest primate relatives, the more we become aware of the importance of learned, socially shared practices and knowledge in these creatures. Do chimpanzees, bonobos, and the other apes have culture? The answer appears to be yes. The detailed study of ape behavior has revealed varied use of tools and patterns of social engagement that seem to derive from the traditions of the specific group rather than a biologically determined script. Humans share with the other apes an ability to learn the complex but flexible patterns of behavior particular to a social group during a long period of childhood dependency.

If we agree that these other primates possess culture, does this demand a reorientation in how humans behave toward them, such as stopping the use of monkeys and apes in biomedical research? Jane Goodall argues vehemently for this change. She emphasizes that cultural processes determine the place of animals within biomedical research, and she advocates eliminating the cultural distinction between humans and our closest relatives for research purposes. Some governments are responding to her calls as seen by the 2008 approval by the Spanish Parliament of the “Declaration on Great Apes,” which extends some human rights to gorillas, chimpanzees, bonobos, and orangutans.61

Some biomedical research disturbs animals minimally. For example, DNA can be extracted from the hair naturally shed by living primates, allowing for cross-species comparisons of disease genes. To facilitate this process,

Cell repositories have been established for researchers to obtain samples of primate DNA. Other biomedical research is far more invasive to the individual primate. For example, to document the infectious nature of kuru, a disease closely related to mad cow disease, extract from the brains of sick humans was injected into the brains of living chimpanzees. A year and a half later, the chimpanzees began to sicken. They had the same classic features of kuru—uncontrollable spasticity, seizures, dementia, and ultimately death.

The biological similarities of humans and other primates leading to such research practices derive from a long, shared evolutionary history. By comparison, the cultural rules that allow our closest relatives to be the subjects of biomedical research are relatively recent. As Goodall has said, ”Surely it should be a matter of moral responsibility that we humans, differing from other animals mainly by virtue of our more highly developed intellect and, with it, our greater capacity for understanding and compassion, ensure that the medical progress slowly detaches its roots from the manure of non-human animal suffering and despair. Particularly when this involves the servitude of our closest relatives.”62

But there are powerful social barriers that work against the well-being of our animal relatives. In Western societies there has been an unfortunate tendency to erect what paleontologist Stephen Jay Gould refers to as “golden barriers” that set us apart from the rest of the animal kingdom.63 Sadly, this mindset blinds us to the fact that a continuum exists between “us” and “them” (animals). We have already seen that the physical differences between humans and apes are largely differences of degree, rather than kind. It now appears that the same is true with respect to behavior. As primatologist Richard Wrangham put it,

Like humans, [chimpanzees] laugh, make up after a quarrel, support each other in times of trouble, medicate themselves with chemical and physical remedies, stop each other from eating poisonous foods, collaborate in the hunt, help each other over physical obstacles, raid neighboring groups, lose their tempers, get excited by dramatic weather, invent ways to show off, have family traditions and group traditions, make tools, devise plans, deceive, play tricks, grieve, and are cruel and are kind.64

This is not to say that we are “just” another ape; obviously, degree does make a difference. Nevertheless, the continuities between us and our primate kin reflect a common evolutionary heritage and a responsibility to help our cousins today. Because of our shared evolutionary heritage, the biology and behavior of the other living primates, like the contemporary study of genetics, provide valuable insight into our understanding of human origins. The methods scientists use to recover data directly from fossilized bones and preserved cultural remains in order to study the human past are the subject of the next chapter.

2.  What kinds of communication systems have been observed in primates? How do these differ from human language?

3.  This chapter describes several instances of scientists revising their paradigms when it appeared that their work was overly influenced by their own cultural norms, such as prevailing gender roles. Can you think of ways that this might still be occurring? How do researchers prevent this from happening?

4.  Given the variation seen in the specific behaviors of chimp, bonobo, and gorilla groups, is it fair to say that these primates possess culture?

5.  As we explored in the previous chapter, many primate species are endangered today. What features of ape biology may be responsible for apes’ limited population size? Do these biological limitations pertain to humans? Why or why not?

This edited volume brings together leading primatologists, ethicists, animal rights activists, field biologists, and psychologists to make the case for extending the rights guaranteed to humans to the other great apes. This book was the first initiative of the Great Ape Project, a worldwide initiative to protect chimpanzees, bonobos, gorillas, and orangutans.

Through in-depth field studies extending over years, primatologists Cheney and Seyfarth examine the degree to which baboon behavior indicates thought compared to instinct. Their fascinating analysis written in an engaging style responds to the statement Charles Darwin made: “He who understands baboons would do more towards metaphysics than Locke.”

This book perfectly blends photographs and text to allow the reader to immediately see the inherent humanity of the bonobos.

Fedigan uses a broad intellectual framework to connect the study of sex differences in primates to feminist theory as well as to the sciences of psychology, neurobiology, endocrinology, and biology. Her perspectives have helped shape prima-tology as it is practiced today.

This book will take the reader from Sapolsky’s childhood in New York City to his years working with a troop of baboons in Kenya, with his fascinating work as a neuroendocrinologist thrown in for good measure. Sapolsky is witty, cynical, and emotional as he tells his story and that of the baboons and the other humans who were part of this journey.

Challenge Issue Given the radical changes taking place in the world today, a scientific understanding of the past has never been more important. But investigating ancient remains challenges us to solve the complex question of who owns the past. For example, pictured here is the Bamiyan Valley, located along a section of the ancient Silk Road, which was a network of trade routes that stretched from eastern Asia to the Mediterranean. Before the Islamic invasion of the 9th century, this place of great natural beauty, located within the Hazarajat region of central Afghanistan, was a Buddhist homeland. There were several Buddhist monasteries, thousands of painted caves, and two colossal statues of Buddha, carved into the cliffs at the valley’s edge and dating back some 1,500 years. In March 2001, the Taliban destroyed these two Buddhas on the grounds that they were idolatrous and an insult to Islam. Today, the niches that once held these grand sculptures are hauntingly empty. A huge international outcry has led to cooperative efforts to rebuild and preserve this archaeological site, and already the results have been impressive. In 2008 a team of Japanese, European, and U. S. researchers demonstrated that the Bamiyan cave wall images are the oldest oil paintings in the world. To whom do such ancient remains belong—to the local government, to the global community, to researchers or scientific institutions, to people living in the region, to those who happen to have possession at the moment? The archaeological perspective holds that for the collective benefit of local peoples and the global community alike, these questions must be answered with an eye to long-term preservation, cooperation, and peace. 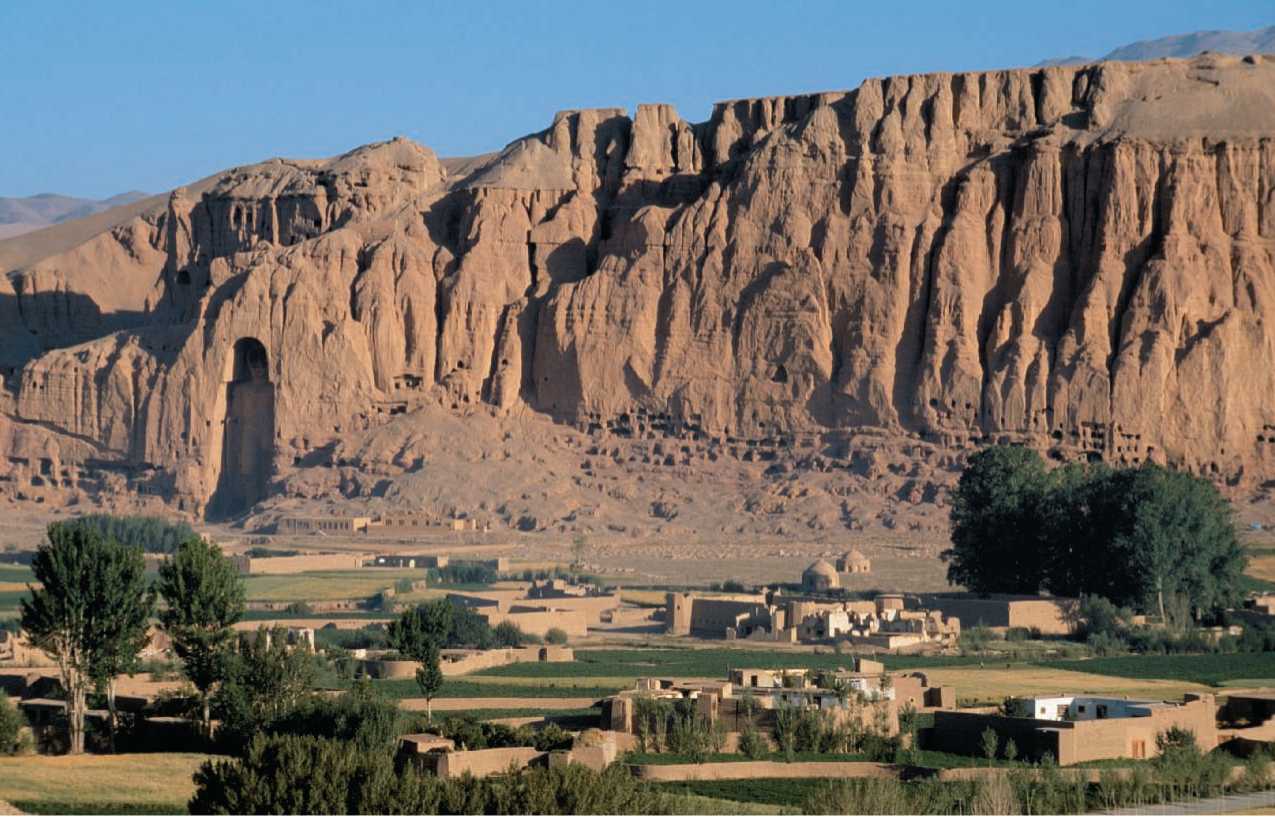