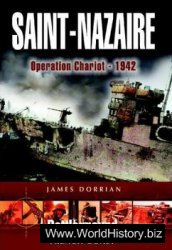 In early 1942, shipping losses in the Atlantic threatened Britain's very survival. In addition to the U-Boat menace, there was real concern that the mighty German battleship Tirpitz be unleashed against the vital Allied convoys. Yet only the 'Normandie' Dock at St Nazaire could take her vast size in the event of repairs being required. Destroy that and the Tirpitz would be neutralised. Thus was born Operation CHARIOT, the daring Commando raid that, while ultimately successful, proved hugely costly. Using personal accounts, James Dorrian describes the background and thrilling action that resulted in the award of five Victoria Crosses. In a dramatic final twist of events, once the battle was over, the converted former US warship Campelton blew up wrecking the dock gates and killing many Germans who thought the battle was won.