Throughout this chapter we have explored the fallacy of the biological category of race when applied to the human species. Generalizations cannot be made about “types” of humans because no discrete types of humans exist. By contrast, the paleoanthropological analysis of the fossil record explored in previous chapters includes defining specific types of ancestors based on biological and cultural capacities that go hand in hand.

The increased brain size of Homo habilis noted around 2.5 million years ago supports the notion that these ancestors were capable of more complex cultural activities than australopithecines, including the manufacture of stone tools. Closer to the present, the same assumptions do not hold. At some point in our evolutionary history we became a single, unified global species. Bearing this in mind, we can frame the modern human origins debate in the terms of the content of this chapter. 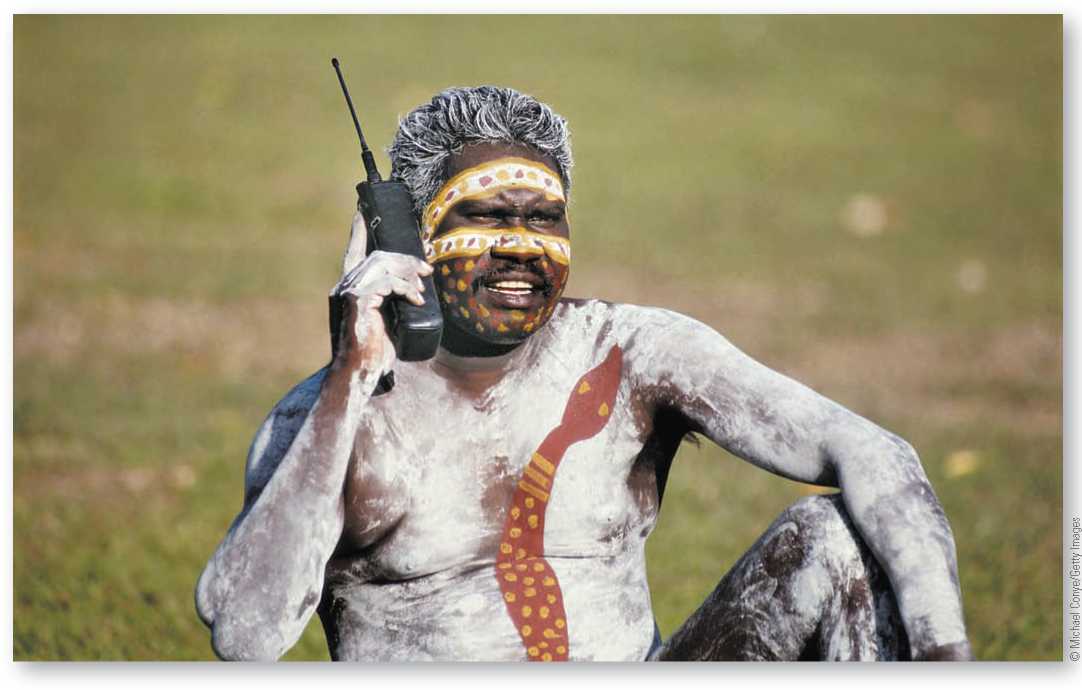 Living people today such as this Aborigine do not meet the definition of anatomical modernity proposed in the recent African origins model. Some paleoanthropologists suggest that this proves that the definition is problematic because all living people are clearly full-fledged members of the species Homo sapiens.

The modern human origins debate hinges on the question of whether cultural abilities and intelligence can be inferred from details of skull and skeletal shape and size. Supporters of the multiregional hypothesis argue that they cannot.19 They suggest that using a series of biological features to represent a type of human being (Neandertals) with certain cultural capacities (inferior) is like making assumptions about the cultural capabilities of living humans based on their appearance. In living people, such assumptions are considered stereotypes or racism. By arguing that ancient groups like Neandertals represent a distinct species, supporters of the recent African origins hypothesis bypass the potential prejudice inherent in these assumptions. Both theories embrace African human origins, and in doing so they confront the issue of skin color—the physical feature that has extreme political significance today.

At present, we clearly cannot make any assumptions about intelligence or behavior based on a single phenotypic trait such as skin color. Given what we know about the adaptive significance of human skin color and the fact that, until 800,000 years ago, the genus Homo exclusively inhabited the tropics, it is likely that lightly pigmented skins are a recent development in human history. Darkly pigmented skins are probably quite ancient. Consistent with humanity’s African origins, the enzyme tyrosinase, which converts the amino acid tyrosine into the compound that forms melanin, is present in lightly pigmented peoples in sufficient quantity to make them very “black.” The reason it does not is that they have genes that inactivate or inhibit it.20 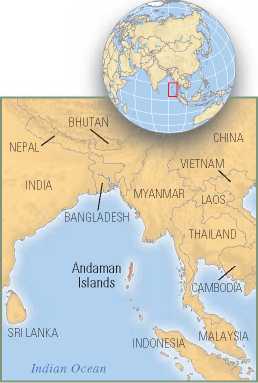 Hot climate as described in Chapter 7. This would have been especially advantageous to our ancestors on the savannah, who could have avoided confrontations with carnivorous animals by carrying out most of their activities in the heat of the day. For the most part, large carnivores such as lions rest during this period, being active from dusk until early morning. Without much hair to cover their bodies, selection would have favored dark skins in our ancestors. All humans appear to have had a “black” ancestry, no matter how “white” some of them may appear to be today.

An interesting question is how long it took for light pigmentation to develop in populations living outside the tropics. Whether one subscribes to the multiregional continuity model or the recent African origins hypothesis, the settling of Greater Australia can be used to examine this question, as we know that the first people to reach Australia did so sometime between

40,000 and 60,000 years ago. These people came there from tropical Southeast Asia, spreading throughout Australia eventually to what is now the island of Tasmania, with a latitude and levels of ultraviolet radiation similar to New York City,

As Aboriginal Australians originally came from the tropics, we would expect them to have had darkly pigmented

Skin. In Australia, those populations that spread south of the tropics (where, as in northern latitudes, ultraviolet radiation is less intense) underwent some reduction of pigmentation. But for all that, their skin color is still far darker than that of Europeans or East Asians. Most of today’s Southeast Asian population spread there from southern China following the invention of farming. This expansion of lighter-skinned populations effectively “swamped” the original populations of this region, except in a few out-of-the-way places like the Andaman Islands, in the Bay of Bengal between India and Thailand.231 The obvious conclusion is that 40,000 to 60,000 years is not enough to produce significant depigmentation.232 233 These observations also suggest that Europeans and East Asians may have lived outside the tropics for far longer than the people of Tasmania or that settlement in latitudes even more distant from the equator were required for depigmentation to occur.

One should not conclude that, because it is newer, lightly pigmented skin is better or more highly evolved than heavily pigmented skin. The latter is clearly better adapted to the conditions of life in the tropics, although with cultural adaptations like protective clothing, hats, and sunscreen lotions, very lightly pigmented peoples can survive there. Conversely, supplementary sources of vitamin D allow heavily pigmented peoples to do quite well away from the tropics. In both cases, culture has rendered skin color differences largely irrelevant from a biological perspective. With time, skin color may lose its social significance as well.

Biological concept of subspecies? Can you imagine another species of animal, plant, or microorganism for which the subspecies concept makes sense?

This very readable book summarizes what scientific data really say about biological differences among humans and exposes questionable assumptions in U. S. culture that promote intolerance and generate problems where none need exist.

This is an update of a classic critique of supposedly scientific studies that attempt to rank all people on a linear scale of intrinsic and unalterable mental worth. The revision was prompted by what Gould refers to as the “latest cyclic episode of biodeterminism” represented by the publication of the widely discussed book, The Bell Curve.

Graves, a laboratory geneticist, aims to show that there is no biological basis for separation of human beings into races and that the idea of race is a relatively recent social and political construction. His grasp of science is solid and up-to-date.

This collection of articles by a wide variety of authors (biologists, anthropologists, psychologists, mathematicians, essayists) critically examines the claims raised in The Bell Curve. For anyone who hopes to understand the race and intelligence debate, this book is a must.

In this book, Marks shows how genetics has undermined the fundamental assumptions of racial taxonomy. In addition to its presentation of the nature of human biodiversity, the book also deals with the history of cultural attitudes toward race and diversity.

Smedley, A. (1998). Race in North America: Origin and evolution of a worldview. Boulder, CO: Westview.

Audrey Smedley traces the cultural invention of the idea of race and how this false biological category has been used to rationalize inequality in North America.

Along with providing an excellent history of the pseudoscience of racial difference, this book is a detailed but readable presentation of the multiregional hypothesis of modern human origins. Among its strengths is a discussion of the problem of defining what “anatomically modern” means.

Challenge Issue Among the primate species, humans are the only ones capable of inhabiting the entire globe. Over the course of human evolutionary history, both our cultural and biological capabilities have contributed to our adaptability as a species. But today it seems that we are approaching the limits of our biological and cultural adaptability. The actions of human societies have changed the world on such a massive scale and at such a rapid pace that we, as a species, are facing novel challenges. If birth and death rates continue at current rates, global population size of 6.8 billion will double in less than fifty years, placing untenable pressures on the world’s natural resources. As water, food, and fuel become impossibly scarce, how will humans adapt? Will this lead to warfare and to an impossible distance between the have-nots and the have-lots? Here, women in Mehdiganj, India, hold water urns called gharas with the words “Water Is Life” written on them to protest the nearby Coca-Cola bottling plant. As the plant uses up the local water, nearby farmers lose their livelihood and way of life. In a competition for resources such as this, global corporations like Coca-Cola have advantages over local inhabitants. But ultimately, for all of us to win, strategies must be implemented to ensure a planet in balance. 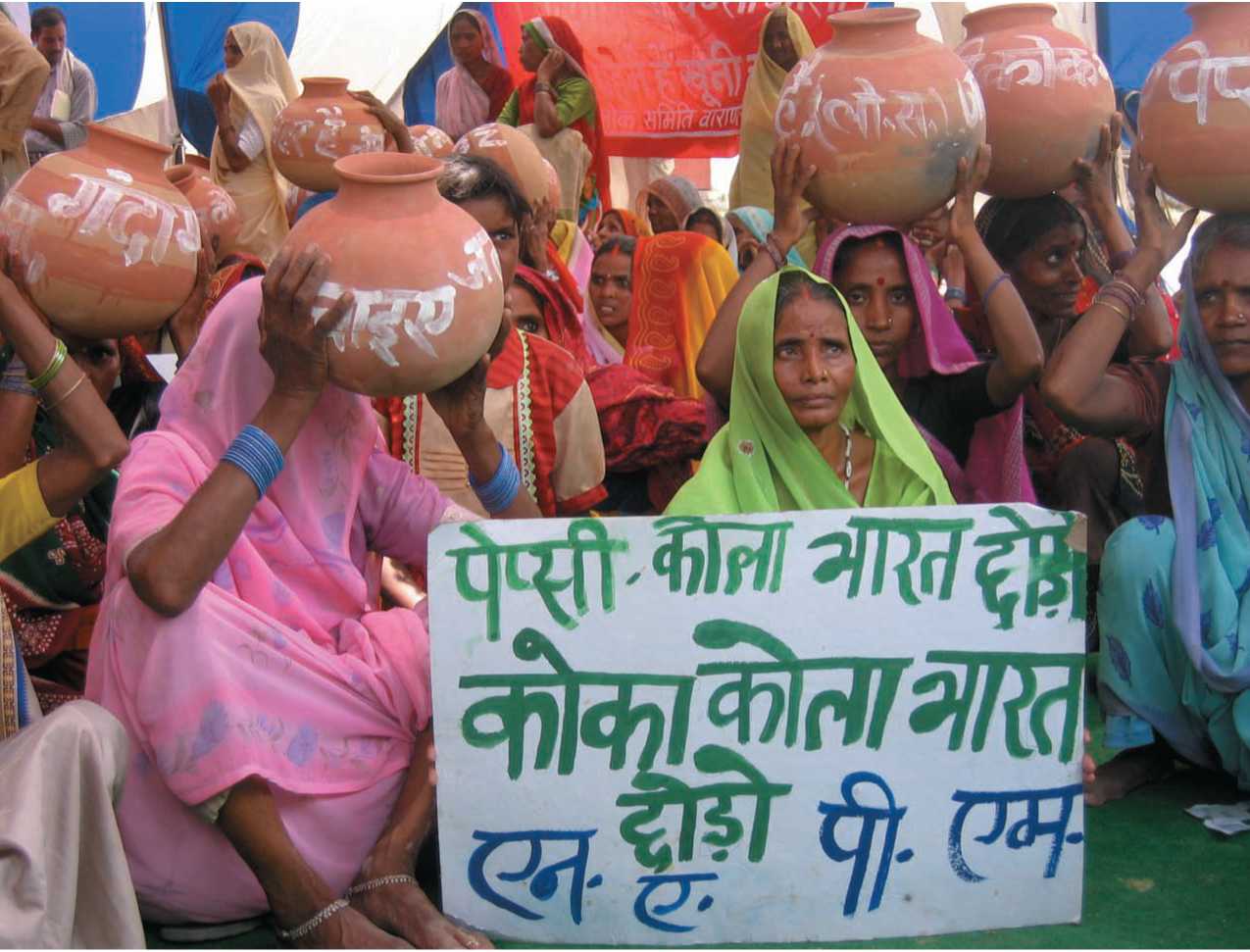