Farther to the north there lived a people generally referred to as the Anasazi, although their real name is unknown. Anasazi is a Navajo word for the “Ancient Ones” or “Ancient Enemy.” They lived in a distinct geographical zone known as the Mesa Verde (Green Mesa), a great tableland in the southwestern corner of Colorado that stretches into southern Utah and slopes gradually to the south. It is called green, because of its heavy forests of pinon and juniper. It is a land of spectacular contrasts, where deep sandstone canyons dissect sage-covered plains, all against the distant backdrop of the San Juan Mountains to the north. Winters can be snowy and summers dry and subject to droughts with intermittent periods of rain. By 900, villages were being built using both rectangular houses and circular pit houses, suggesting the fusion of diverse building traditions. Buildings usually faced onto a courtyard or plaza located to the south or southeast, which held one or more kivas. At McPhee village, for example, a typical dwelling of about 3 by 5 meters consisted of a living room with two smaller storage rooms to the rear (Figure 16.11). The dwellings were built contiguous to each other, end to end, in curved strands to form a common area on one side and a shared protective wall to the rear. There were several kivas, mostly oriented to the southeast, each serving seemingly the needs of five or six families. Most of the walls were of stone covered with adobe plaster. Timber roofs were supported by the opposing walls and by extra posts.9

Initially, warm temperatures during this period were favorable to agricultural production, but between 880 and 920, temperatures dropped and large populations could no longer be sustained, resulting in the abandonment of many villages and emigration movements southward. McPhee was abandoned around 975. In the resulting adjustment, a new cultural formation emerged. Instead of settlements in the shape of strands, houses were now designed as aggregated clumps, each probably belonging to a separate clan, but all sharing a common kiva. T. J. Ruin, built around 900 and located some 490 kilometers to the south of Alkali Ridge, is representative. It was dramatically located along a clifi' edge. Care was taken in the construction of the walls, which were provided with a stone foundation to delay the rise of moisture into the wall, one of the main problems of adobe walls. Some of the walls even supported a second floor. The elaborate decoration of the pottery indicates an increasingly rich, ceremonial life. 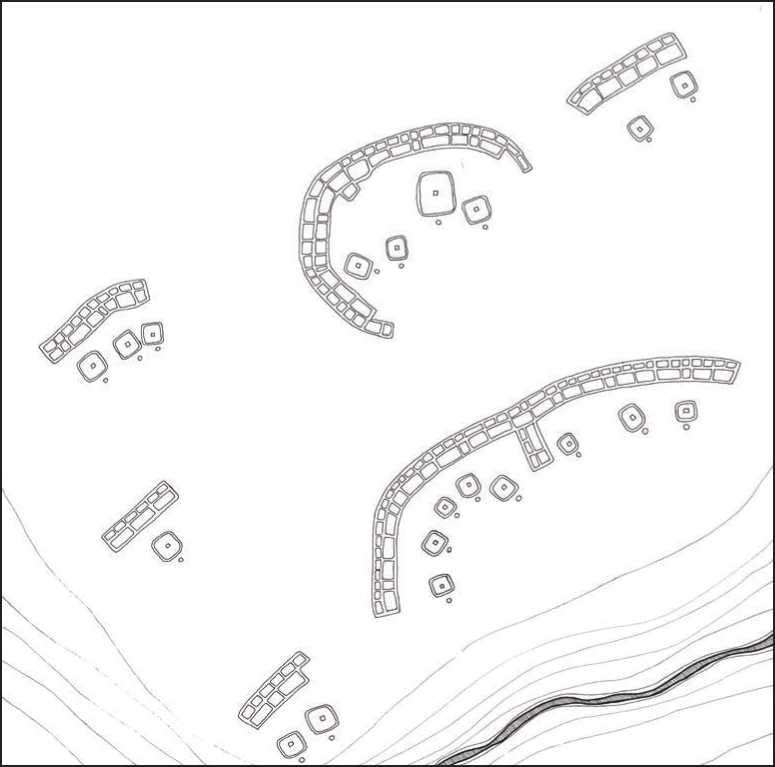