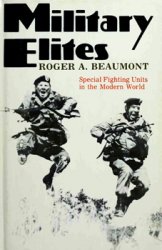 Merrill's Marauders. Darby's Rangers. The French Foreign Legion. The Green Berets. The Commandos. Names that have come to epitomize daring, determination and expertise. Names that stir us with the promise of martial glory. Precisely as they were meant to do. For it is the opinion of the author that many elite military units were formed to serve psychological rather than tactical needs. This book tells the history of more than eighty such organizations, from the Arab Legion of Glubb Pasha to the heliborne air cavalry of Vietnam.