Secrets of the Spitfire 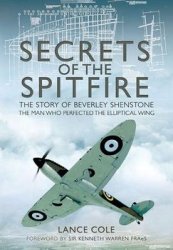 This book tells the tale of the brilliant aerodynamicist Beverley Shenstone MASc, HonFRAes, FAIAA,AFIAS, FCASI, HonOSTIV. As R.J. Mitchell's chief aerodynamicist, it was Shenstone who designed the Spitfire's wing - the wing that gave the Spitfire it crucial advantage in the Battle of Britain and beyond. A quiet man, Shenstone never sought glory for his work, yet in recent years he has been credited as the man who persuaded Mitchell to adopt the ellipse - a modified ellipse that was unique in its shape and its combined use of two integrated aerofoil sections. Shenstone's knife-edge shape reached far back into early aeronautics for its inspiration.