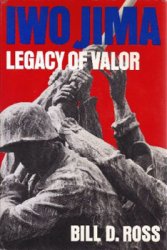 An hour by hour account of the largest and most brutal assault ever conducted by the Marine Corps. The goals and battle objectives were clearly defined in advance, which is always a major plus. During WWII the Marine Corps was assigned the task to dislodge the entrenched Japanese military from the Pacific island of Iwo Jima. Some, more than others, knew the extreme difficulty in advance, but through all the ranks each Marine was confident of success. This historical account exemplifies the Marine Corps tradition of dedication and determination where “uncommon valor was a common virtue”. Awakened on the ships, D-Day February 19, 1945 at 3 AM, the Marines later landed on the beach with but one directive to move forward.