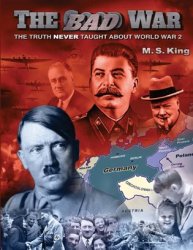 245 Pages / 500 Illustrations During the 75 years that have now passed since the end of the grand history-altering event known as World War II, only a single narrative of the great conflict has been heard. It is a story which the architects of the New World Order have implanted, no, POUNDED into the minds of three subsequent generations. Every medium of mass indoctrination has been harnessed to the task of training the obedient masses as to what the proper view of this event should be. Academia, news media, public education, book publishing, TV documentaries, Hollywood films, clergymen and politicians of every stripe all sing the same song. You know the familiar lyrics: “Led by Adolf Hitler; Germany, Italy and Japan tried to enslave the planet. The “good guys” of the “world community”, led by Franklin Delano Roosevelt (FDR) and Winston Churchill, banded together and stopped them. Literally, not a day seems to pass without some sort of media reference to this incomplete and simplistic narrative; a story which oh-so-conveniently ignores the previous decades of critical history leading up to World War II, omits vital information from the actual war years, and outright fabricates lie after lie after lie. Indeed, the “official story” amounts to a manufactured mendacity of such mountainous dimensions that the human mind will have a hard time processing the actual truth of the grand event, no matter how compelling the case may be. Isn’t it time you heard a different tune; at least for your consideration? Haven't you ever at least been curious as to what "the other side of the World War II story" was? If so, you ought to have a look at 'The Bad War', a heavily illustrated epic timeline that will transport you back to the mid 1800's; and then lead you on an exciting "you are there" journey right up through both World War I and World War II. Well-written, entertaining, and meticulously documented, 'The Bad War' is unique for its ability to condense so much real history into just 245 attention-riveting, illustration-rich pages. But do be forewarned. Your worldview may never be the same.