How Rome Fell: Death of a Superpower 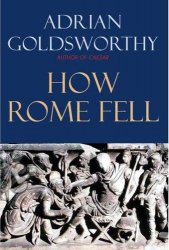 Starred Review. At only 40 years of age, British historian Goldsworthy's (Caesar) ninth Roman history offers the same high level of scholarship, analysis and lucid prose as the previous eight. After a superb survey of Roman politics and civilization, Goldsworthy begins with the death in A.D. 180 of emperor Marcus Aurelius, whose reign is traditionally viewed as the apex of Roman power. During the disastrous century that followed, emperors rarely ruled more than a few years most were murdered, and civil wars raged, though there was some stability during the reigns of Diocletian and Constantine. Invasions slowly chipped away at the empire until it vanished in A.D. 476 with the abdication of the last Western emperor. Goldsworthy makes sense of 300 years of poorly documented wars, murders and political scheming. Highly opinionated, he presents surviving documents and archeological evidence to back his views such as that Constantine became Christian because Roman leaders traditionally believed that divine help won battles, and the Christian god seemed to Constantine like the front-runner. This richly rewarding work will serve as an introduction to Roman history, but will also provide plenty of depth to satisfy the educated reader.