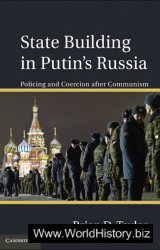 The Soviet Union has been characterized as “the world’s largest-ever police state.” But why is “police state” a pejorative, a synonym for brutal dictatorship? After all, if we expect the state to do anything, policing is surely one of those things. Although policing is a function that can and often is carried out by private actors, all modern states create “an organization authorized by a collectivity to regulate social relations within itself by utilizing, if need be, physical force.” Try living in a community of any significant size that does not have an authorized organization capable of policing it, and one will quickly see the virtues of such a force. Anarchists aside, most citizens in the modern world would rather live with police than without them. But the term “police state” resonates because state power, as Max Weber recognized, ultimately rests on the ability to coerce. The behavior of its coercive organizations, such as the military, the police, and the secret police, tells us much about the character of a state, as the Marenin epigraph emphasizes.