The Struggle for Tennessee - Tupelo to Stones River 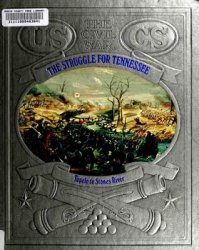 This book looks at the 1862 (and early 1863) fighting in the West. By now the Union has control of Nashville and has actually made inroads into Alabama and Mississippi. However, poor Federal leadership under Maj. Gen. Don Carlos Buell has resulted in the initiative going over to the Confederates and a poorly-coordinated offensive by two separate armies under Kirby Smith and Braxton Bragg initially succeed in capturing Kentucky's capital at Frankfort and threatening Louisville and Cincinnati. The Battle of Perryville and a hard march back into Tennessee resulted in depleted Confederate forces but Maj. Gen. William Rosecrans, now in command of the Army of the Cumberland, gives them time to regroup before he ends of fighting Bragg at the Battle of Stones River, southeast of Nashville.