A Magnificent Fight": The Battle for Wake Island 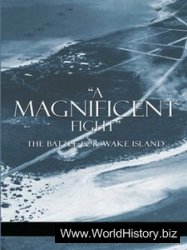 Author: Robert J. Cressman
A Magnificent Fight": The Battle for Wake Island
Naval Institute Press Annapolis
2013
ISBN: 1591141753
Format: EPUB
Size: 6,6 МБ
Language: English
Pages: 324
Soon after the attack on Pearl Harbor, Japanese land-based bombers pounded Wake Island, the American advanced base that was key to the U.S. Navy's strategy in the Pacific. Throughout the next two weeks, the Wake Island garrison survived nearly daily bombings and repulsed the first Japanese attempt to take the atoll. The determined defenders provided a badly needed lift to American morale. Cressman was the first to make extensive use of Japanese materials to identify the enemy order of battle and the roles each unit played in the drama to provide a moving account of the heroism of the defenders in the face if tremendous odds.