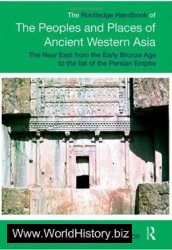 The Rоutledge Handbook of The Peoples and Places of Ancient Western Asia
Author: Trevor Bryce
Rоutledge
2009
Pages: 944
Format: PDF
Size: 36 mb
ISBN: 0415394856
Language: English
This 500,000 word reference work provides the most comprehensive general treatment available of the peoples and places of the regions commonly referred to as the ancient Near and Middle East – extending from the Aegean coast of Turkey in the west to the Indus river in the east. It contains some 1,500 entries on the kingdoms, countries, cities, and population groups of Anatolia, Cyprus, Syria-Palestine, Mesopotamia, and Iran and parts of Central Asia, from the Early Bronze Age to the end of the Persian empire.